I was late for my train home the other night so found myself at the station in that weird dead spot you get around half-past five where the 5 o’clock finishers have all gone and the people who finish work at half past haven’t made it as far as the station yet. It’s odd – the station goes from bustling and heaving with hordes of people to being really quiet, if only briefly.

I’ve caught this later train a couple of times in the past. It’s the Sheffield train, leaving Leeds at 17.48, but oddly arrives half an hour early and sits on the platform, with the lights off.

There are usually a couple of people waiting to get on the train. As it’s so early, and there’s no sign of the guard, people tend to loiter near-ish to the doors, but not right up next to them, as they do on the early trains.

Look, I did a diagram. Take a moment to admire my fearsome artistic skills. Yes the other red line bit is another door, and the big blue block is another carriage, but by this point in the art I’d kind of started losing the will to live as I’d done something weird with layers. I digress. 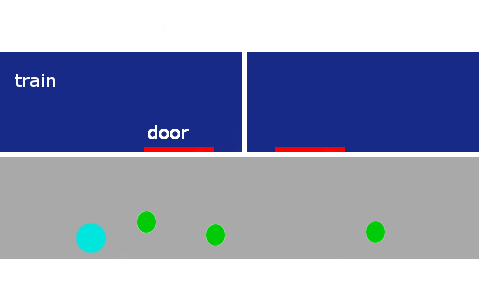 ok, you can stop admiring it now. The green blobs are the people who’ve arrived before me. I’m the slightly larger (those art skillz at work again) blue blob. As you can see, I’ve taken up a position nearish to the door, but behind the people who’ve already arrived. This *is* Britain. We queue properly here, even when no actual queue exists. No-one wants to go and stand next to the train door, as that looks a bit keen and needy. We’re being kind, and leaving sufficent room for people to get past along the platform.

After a while, a few more people turn up. We move into the phase of waiting where surreptitious eye-contact is made, with everyone marking their space and the order of the virtual non-queue. All is well at this point. We check our phones or read a book.

Now, I know we weren’t properly queueing, and there was a gap and everything, but what are they thinking? This is a blatant breach of queue ettiquette!

The green dots and myself exchange eye contact with each other, silently fuming at this ne’er-do-well interloper in his skinny jeans, plaid shirt and post-ironic hipster hornrims.

See? More people have noted this blatant act of queue disregardation and join in, standing next to the doors. Those of us who were here first exchange glances, and start shuffling, taking a step forward, subtly jockeying for position. After all, we were here first. We need to get on this train! We want a seat, dammit!

No matter that there are currently about a dozen people waiting for two carriages worth of empty train, it’s the principle of the thing!

We watch out of the corner of our eyes as the driver ambles down the platform, bag slung over one shoulder. He breezes past us and gets into the driver’s compartment. The train whirrs and chugs into life. Lights go on inside the carriages and this happens.

Everyone has given up on the whole queue thing, and bodies press together, eyes all fixed on the little circular door open button which resolutely remains un-lit. No-one dares look at each other. Phones are returned to pockets and bags as we all wait for…

The button lights. A hand jabs out at it, the pressee wanting to avoid the shame of taking more than half a second between the button lighting up and being pressed. We’re all judging how quickly this is done, and this time he’s passed the test. The doors open and we surge as one onto the train.

The weird thing is, once we’re all on there are plenty of seats to go around. I end up with that nirvana of train travel, a table seat. Not only that, but a table seat with no-one else sat at the table.

Bliss. What’s all the fuss about?