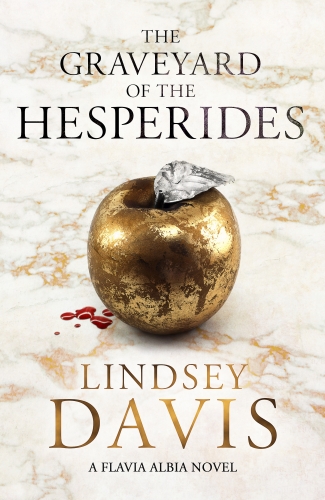 I’m taking part in a week-long flurry (can a flurry be that long?) of posts celebrating Lindsey Davis, bestselling author of the Falco (and now Flavia) series of historical crime stories set in ancient Rome. Lindsey’s latest novel, The Graveyard of the Hesperides

, the 4th book in the Flavia Alba series, is published by Hodder and Stoughton on 14 April 2016.

So, on Monday Christine from Northern Crime Review hosted a post by Lindsey looking at longevity. On Tuesday Lisa from Reading Room with a View looked at characterisation, with an introduction to Marcus Didio Falco. And yesterday, with Victoria from Off The Shelf Book Reviews, Lindsey talked about dialogue in historical fiction.

Today I’m delighted to welcome Lindsey and her editor Oliver Johnson to discuss the editorial process.

Firstly, some questions for Oliver

You have had the same editor – faithful throughout – like a 27-year-old marriage. Is it still easy to work closely after all these years?

It may have been 27 years, but it doesn’t SEEM like 27 years. There are any number of reasons for this, the two most important being Lindsey’s work, which is always fresh, pacy and leavened with humour and, secondly, though our editor-writer relationship is necessarily a business-like one, we still have fun and by now have a huge amount of war stories to reminisce and chuckle over.

How do you get on and work together? How has your working relationship changed over the years?
I don’t think much has changed, to be honest. In the old days I used to print out Lindsey’s manuscript and then write my editorial comments on it. As my handwriting is illegible she had to guess what I had written and this meant she never had to actually adopt any of my suggestions. Nowadays I edit digitally so it’s easier to see what Lindsey DOES change. I discover Lindsey does pay attention when there is a comment, but finds her own way of fixing things, which is just as it should be. We still have the odd tussle over jackets and titles (see below)

Do you still surprise each other with opinions – or are you at a stage where they know what the other one is thinking?
There is an element of second guessing, for sure. But there is always something to discuss. I will always call for more plot points, and, as these books are essentially murder mysteries, for more bodies. Lindsey is amazingly inventive with language and will always put in some words I’ve never come across before

Are there any difficult areas (e.g. jackets, subject matter)?
Jackets have been a lively topic of conversation. In the early days I mistakenly wanted to convey the humour of the books on the covers but this is absolutely impossible without becoming naff. These days we stick to simpler, iconic designs.

Thanks Oliver! Over to Lindsey…

We are talking about traditional publishing here. Oliver and I are both traditionalists, and I suppose we would say that means we do it properly.
An editor doesn’t just look at the manuscript. He (assume I mean or she) first buys the book, convincing his colleagues that they will agree to have it on their list.

He see it through all the production stages. Yes this means the jacket, which is always a bone of contention. Also the title on which we have generally had a tussle. I don’t think we have ever had problems with content. I did have to convince him that if a lion was killed (Leonidas the public servant lion in Two for the Lions, whose death is very thoroughly investigated by Falco) we would not have mad people writing A cat is killed in this book! And I would never write about a torturing, child-killing serial murderer because Oliver is a loving father and anyway I would hate it myself. A little boy is in fact killed at the start of The Ides of April, but Oliver must have been snoring when he read that part of the manuscript (it’s only to show how dangerous life was for Roman children normally, and it happens ‘off-stage’ and quickly).

I don’t believe our working relationship has ever changed, except that of course I have become mellow and tolerant…We have seen each other through some dark times, but also had a wonderful experience bringing these books to the world. It is extremely unusual to have the same editor for 30 years, but I have just been incredibly lucky to have that privilege.

Did you get grief from your publisher over Falcio becoming Flavia?
Grief over Albia? Of course not. It was Roman. The poor bloke was scared to death that I’d ask if I could now do a series about accountants in Penge. (of course that’s what I really am planning, but I haven’t quite finished the research). This is the man who recoiled when I said I wanted to do Rebels and Traitors, crying ‘Lindsey, I don’t think I can sell a historical novel about Birmingham!’ – only to cheer up when I mentioned death, pillage, arson and rape were a feature. I know what he wants in a book (‘More bodies!’)

Many thanks to Lindsey and Oliver for taking the time to do the Q&A. Look out for more posts celebrating The Graveyard of the Hesperides

and Lindsey over the week.