A young girl goes missing after getting into a car with a mysterious man. Soon after, a second girl disappears, and her devastated father, Witness, sets out to seek revenge. As the trail goes cold, Samantha Khama –new recruit to the Botswana Criminal Investigation Department –suspects the girl was killed for muti, the traditional African medicine usually derived from plants, sometimes animals and, recently and most chillingly, human parts. When the investigation gets personal, Samantha enlists opera-loving wine connoisseur Assistant Superintendent David ‘Kubu’ Bengu to help her dig into the past. As they begin to discover a pattern to the disappearances, there is another victim, and Kubu and Samantha are thrust into a harrowing race to stop a serial killer who has only one thing in mind

Regular readers of the blog will no doubt have noticed that I’ve read quite a bit of Nordic Noir this year, from Ragnar Jonasson’s brilliant Snowblind and Nightblind, to Quentin Bate’s Thin Ice and Gunnar Staalesen’s We Shall Inherit The Wind amongst others.

This was the first ‘Sunshine Noir’ (is that the right term?) that I’ve read though! It’s a *lot* warmer and the detectives drink a lot less coffee than their Scandinavian counterparts!

Deadly Harvest is set in Botswana – I have to confess that my African geography is a little sketchy, so had to look it up. Plus, I love a good map! Here it is, just north of South Africa.

Right, Geography lesson out of the way, on with the book. It’s set in Gaborone, near the south-east border of the country, and the authors paint a vivid picture of the city and its politics.

At the heart of the story is the fascinating subject of muti, a traditional medicine usually made from plants and sometimes animals. But in this case, there’s something darker and gruesome afoot and people are going missing. Powerful muti…

The story starts with a missing girl, picked up on the way home from the shops. Her disappearance is more or less ignored by the local police and it’s only much later when new recruit Samantha Khama, new recruit for the Botswana Criminal Investigation Department gets involved that the case really starts to get moving. It took me a little while to get into the book, but once Samantha and Assistant Superintendent Kubu are on the case, I was hooked.

The case unfolds at a leisurely pace and we’re left wondering who is doing the abducting and what their ultimate motive is. Along the way we meet a lot of fascinating characters, chief amongst them David ‘Kubu’ Bengu himself. I loved that he was a normal family man with a solid family life – so often in crime fiction you find someone with deep dark secrets or issues they’re wrestling with. With Kubu his only vice seems to be his addiction to sneaking cookies at every available opportunity!

This is my first Detective Kubu book, but definitely won’t be the last. I was surprised to find out that it’s the fourth book starring our cookie-loving detective, but provides a great jumping-off point into his world.

You can read an extract from Deadly Harvest over at Damp Pebbles, where you can read the start of chapter 1.

Many thanks to Karen (@OrendaBooks) for the review copy of Deadly Harvest in exchange for an honest review. Another cracker from Orenda Books – Karen has some kind of sixth sense when it comes to picking outstanding crime fiction!

Deadly Harvest is available now in ebook and paperback. 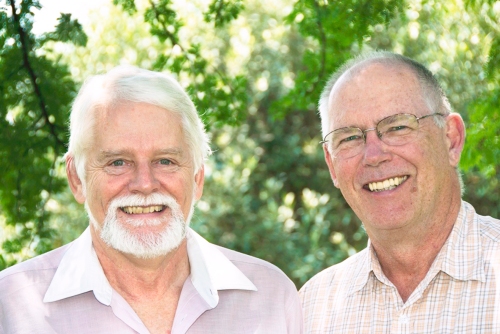 Michael Stanley is the writing team of Michael Sears and Stanley Trollip. Both were born in South Africa and have worked in academia and business. Stanley was an educational psychologist, specialising in the application of computers to teaching and learning, and is a pilot. Michael specialises in image processing and remote sensing, and teaches at the University of the Witwatersrand. On a flying trip to Botswana, they watched a pack of hyenas hunt, kill, and devour a wildebeest, eating both flesh and bones. That gave them the premise for their first mystery, A Carrion Death, which introduced Detective ‘Kubu’ Bengu of the Botswana Criminal Investigation Department. It was a finalist for five awards, including the CWA Debut Dagger. The series has been critically acclaimed, and their third book, Death of the Mantis, won the Barry Award and was a finalist for an Edgar award. Deadly Harvestwas a finalist for an International Thriller Writers’ award