Delighted to welcome D. Nolan Clark to the blog today. Forsaken Skies is the first book in a new series – more of that later. Firstly we’re talking science fiction technologies – how close are we? Over to you…

2015 came and went, and the promises of Back to the Future II failed to be realized—real world hoverboards are less a fun sport accessory and more a disappointment that tends to explode. This wasn’t the first time science fiction had promised us cool new technologies that just kind of fizzled—we never got undersea cities or gorilla butlers, either. Some of the most familiar technologies from science fiction are more plausible, however. Let’s look at a dozen science fiction technologies and where they’re at now:

Faster-than-Light Travel: A long staple of sci-fi movies and books, the ability to travel between the stars without spending an entire lifetime doing it has always been one of our best dreams. Einstein said it was impossible, though, and it’s a bad idea to bet against history’s most iconic genius. News stories about subatomic particles that move faster than light (and thus, backward in time) are common but never quite pan out. A putative “Warp Drive” is being examined by NASA, which is exciting, but so far the jury’s still out—and expectations are low.

Laser Guns: Long thought to be a bust, lasers are back in a big way. The US and Israel are jointly testing a THEL (Tactical High Energy Laser) weapon system, which uses a chemical laser to detonate incoming missiles in mid-air. The energy needs of the weapon are staggering, but a projectile that travels at the speed of light is, it turns out, very useful as a defensive weapon.

Force Fields: The idea of a personal shield that will protect you from all harm is still a ways off. Magnetic bottles, though, which are designed to hold back dangerous substances like plasmas, are very real and are part of many new technologies. Powerful electrical fields have been proposed for use to protect interplanetary spacecraft against debris, but they only work against charged objects, so they need to be supplemented with good old armor plating. Give this one some more time to bake.

Teleportation: Theoretically, it’s possible. Quantum mechanical effects like entanglement and tunneling suggest that bodies could be moved almost instantaneously across massive distances, even through barriers. Theoretically. A more accessible tech is the rise of 3D printing, which would allow you to make copies of just about anything, even half a world away. It may not be as exciting, but the potential to create replacement parts in the field could revolutionize how many present-day technologies work.

Suspended Animation: Need to travel to Alpha Centauri but it’s going to take 120 years? Just put yourself on ice and sleep your way there—right? Yeah, it turns out if you freeze somebody in liquid nitrogen… they just die. Nowadays scientists are looking into a state called torpor, instead. This is the same physiochemical process that lets bears hibernate, and it could massively reduce the amount of food, water, and oxygen an astronaut would need on a long journey. It’s a bit more… messy, though. Robots and catheters would be needed to keep the torporous astronauts clean and healthy.

Space Habitats: Is your local city feeling too crowded? Don’t like the local laws? Why not build your own nation in space? Sadly, of all the technologies on this list, this is easily the most feasible but also the one we’re moving away from the fastest. The International Space Station is slated for destructive de-orbiting (that means exactly what you think it means) in 2024, and there’s currently no planned replacement. The Chinese have suggested they might build a space station soon, but they’re a little hesitant on sharing details. Cities in space are still a distant dream.

Fusion Power: The world has needed this one since the 1970s, and it’s still not here. Which isn’t to say nobody’s trying. Germany is pouring money into something called a Stellerator, which has shown promising results, while France is building a twenty billion dollar Tokamak (the original fusion reactor design, and arguably still the best). Real progress has been made, but so far it takes more energy to start the reaction than the reaction produces. Don’t give up hope, though—this one would change the world overnight, and solve many, many problems, so it’s definitely worth pursuing.

Virtual Reality: 2016 was often described as the year VR was truly born… yet at this point that means sub-Mario Bros. graphics and a headset that gives most people headaches and nausea after half an hour’s use. Well, baby steps. The promise of a simulated reality so perfect you can’t tell it from the real thing—like the Matrix—remains on the horizon, but it gets closer every day. This is definitely a technology to watch.

Mind-Computer Interfaces: Do you want a chip implanted in your head that will let you control things in your environment just by thinking really hard at them? I mean, do you? Well, if you’re still saying yes, you’re definitely in luck. There have been huge strides in this technology every year. The most exciting application for the tech is to create artificial limbs that respond to the user’s mental commands just like their biological limbs do, and allowing the blind to see and the deaf to hear by bypassing nonfunctional organs and sending info from cameras and microphones directly to the appropriate lobes of the brain. Using your brain to turn up the thermostat or send subconscious texts to your friends isn’t far behind.

Robots: The robots are here, and have been for decades, working in our factories. But recent developments have led to robots that look almost like what you see in the movies—robots that can walk like humans, manipulate objects, navigate the environment. This is one of the fastest growing fields in science fiction technology—and it could have a massive impact on how we live our lives in the current generation.

Artificial Intelligence: Do not be fooled when IBM, Google and Microsoft talk about AI. They’re using over-zealous terminology for what are really just neural networks and expert systems. Fantastically advanced computers, to be sure, but nowhere near the self-aware, thinking machines of fiction. We’re still hampered from that development by the fact that we don’t truly know what consciousness is, or how it works. Which isn’t to say we couldn’t accidentally develop it in the lab… a lot of Big Thinkers have recently warned about the dangers of runaway AI, but so far they’re just thinking forward. “Strong AI” is still very much a future technology.

Cloning: Banned pretty much everywhere, and considered unethical by just about everybody, human cloning is one of the few technologies we’ve turned away from—probably because there’s no killer app for it, yet. Don’t get too comfortable, though. Genetic science and stem cell research is already developing the ability to grow human organs on the lab, constructing kidneys and livers and such around collagen scaffolding. There’s a lot of potential there, if we can get past the ick factor.

Forsaken Skies by D. Nolan Clark is published by Orbit, and is out now. 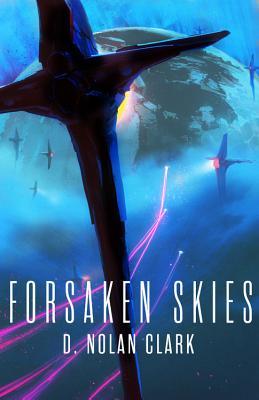 Commander Lanoe is one of the navy’s greatest heroes, but the civil war left him with nothing but painful memories. When a planetary governor is murdered, it falls to Lanoe to hunt down the killer and bring them to justice.

Yet his pursuit will lead him towards the greatest threat mankind has ever faced.

An unknown armada has emerged from the depths of space, targeting an isolated colony planet. As the colonists plead for help, the politicians and bureaucrats look away. But Lanoe has never run from a fight – and he will not abandon thousands of innocents to their fate.

2 thoughts on “Twelve science fiction technologies: How close are we? a guest post by D. Nolan Clark”