Today I’d like to welcome Paul Harrison to the blog. Paul is the author of Revenge of the Malakim, book 1 of The Grooming Party trilogy.

The question for Paul today is this:

“Which authors inspired you to write and who do you follow avidly in your own reading?”

The first book I ever read, that had a profound effect, on me, was Moby Dick by Herman Melville. The character, Captain Ahab, and his obsession with catching the white whale, which he turned into a monster, had me gripped. A fundamental fight between good and evil. Yet, by the end of the book, I was left contemplating, which was which.

It was that volume, that aroused my interest in writing stories. At school, I excelled in all areas of English. My reading habits changed, as new interests came to the fore, girls and football. Not necessarily in that order. Later in life, I began to avidly read Sir Arthur Conan Doyle, I still enjoy reading his Sherlock Holmes stories. Both authors undoubtedly paved the way for my own writing career.

However, it was my great, great grandfather, Will Scott, who was my true inspiration. He was employed as a letter reader/writer and story teller in Victorian times, there were tales within the family of his writing exploits and stories. I believe, the writing gene, if there is such a thing, has been passed down to me from him. In reverence to him, I have named the main protagonist, in my book Revenge of the Malalkim (DCI Will Scott) after him.

The twists and turns and plot lines within Revenge of the Malakim, are very much inspired by both Agatha Christie and Conan Doyle. I want the characters to engage with the reader, and become friends, or in some instances, someone to seriously dislike.

The first author I physically met, was the late Jonathan Goodman. He became a trusted friend, and a mentor for my true crime writing. Together, we would often take off on case research expeditions across the UK. I learned so much about the writing craft, from Jon, he too was an excellent story teller. I still miss him to this day.

My interest in reading crime fiction re-emerged with Mark Billingham books. That man can write a gripping, down to earth book, he’s someone whose books I will always find time to read. Another author who I thoroughly enjoy reading, is Malcolm Hollingdrake. He’s got a story telling style that really appeals to me.

Revenge of the Malakim is my first crime fiction novel. It’s the first book in the Grooming Parlour trilogy, published by Williams and Whiting. I can promise the reader many twists and turns right through to the last page. One of the crime scenes is, let’s just say, unique. I’ll leave that surprise for the reader to find.

Thanks Paul. Revenge of the Malakim is published by Williams & Whiting and is out now. 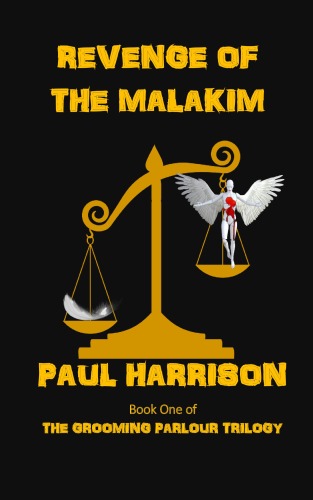 It’s high summer and the streets of Bridlington East Yorkshire are awash with tourists. A serial killer is on the loose. DCI Will Scott and his team embark upon a fast paced investigation to catch a killer with a unique agenda. As the body count rises the killer randomly moves location and the police are unwittingly drawn into a dark and sinister world where cover-ups and corruption reigns. A place where no one can truly be trusted and nothing is ever what it seems.