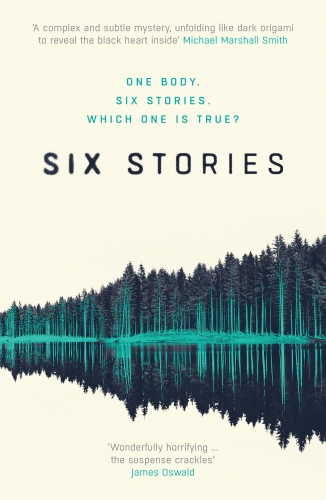 1997. Scarclaw Fell. The body of teenager Tom Jeffries is found at an outward bound centre. Verdict? Misadventure. But not everyone is convinced. And the truth of what happened in the beautiful but eerie fell is locked in the memories of the tight-knit group of friends who embarked on that fateful trip, and the flimsy testimony of those living nearby.

2017. Enter elusive investigative journalist Scott King, whose podcast examinations of complicated cases have rivalled the success of Serial, with his concealed identity making him a cult internet figure. In a series of six interviews, King attempts to work out how the dynamics of a group of idle teenagers conspired with the sinister legends surrounding the fell to result in Jeffries’ mysterious death. And who’s to blame … As every interview unveils a new revelation, you’ll be forced to work out for yourself how Tom Jeffries died, and who is telling the truth. A chilling, unpredictable and startling thriller, Six Stories is also a classic murder mystery with a modern twist, and a devastating ending.

Recently I went along to the Orenda Roadshow in Leeds where Karen Sullivan had assembled some of her lovely authors (including her co-pilot Thomas Enger) to do readings from their books. I’d already read books by quite a few of them, and had books from one or two more, but one which really grabbed my attention was a guy from Newcastle telling a story about a murder. As you’ve no doubt guessed, that was Matt Wesolowski and he was reading from his debut novel, Six Stories. And he was up against some stiff competition that evening, I can tell you. I knew I had to buy a copy.

Six Stories is unlike anything I’ve read before. Told in the form of six episodes of a Serial-style podcast, we delve into the mysterious events at Scarclaw Fell twenty years ago when a young boy goes missing and is ultimately found dead.

Each episode is an interview with one of the group of friends who were there that evening, and Matt deftly weaves an intricate, multi-layered plot, letting us in on one secret at a time. And there are so many secrets…

It’s an astonishingly confident and compelling novel, all the more impressive for being a debut. Matt manages to capture the distinct voices of the cast of characters perfectly, with all of their teenage angst and worries, the shifting group dynamics and emotions.

Six Stories is dark and disturbing in places, with an unsettling feeling of dread creeping up as you delve further into the story and the events on Scarclaw Fell.

I know it’s only March, but I will call it now – Six Stories will be one of my books of 2017, and I would be very surprised if it’s not very near the top of the list. I highly recommend it.

Six Stories is published by Orenda Books and is available now. You can find Matt on twitter @concretekraken.