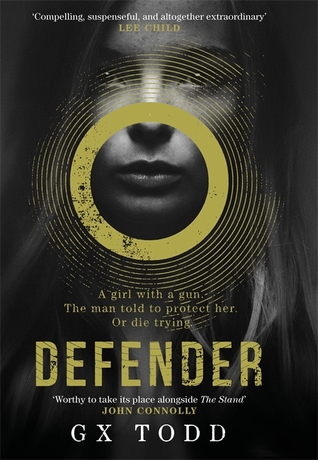 In a world where long drinks are in short supply, a stranger listens to the voice in his head telling him to buy a lemonade from the girl sitting on a dusty road.

The moment locks them together.

Here and now it’s dangerous to listen to your inner voice. Those who do, keep it quiet.

These voices have purpose.

And when Pilgrim meets Lacey, there is a reason. He just doesn’t know it yet.

Set in a post-apocalyptic dystopia where something… unusual has happened, Defender tells the story of a young girl called Lacey and a drifter, Pilgrim. The world has changed – the biggest threat to mankind is from the voices that have started appearing – voices which tell people to do bad, bad things. Suicide, murder or a descent into madness – you don’t get to choose, the voices do…

Defender is a thriller, of sorts. It’s also part horror, and you could argue there’s a dash of sci-fi in there too. It’s also startlingly original, blackly comic, bleakly desolate, with an utterly fantastic cast of characters, and a setting which just oozes menace. It’s one of those ‘just one more chapter’ books, which keeps you up until far too late.

It’s dark and brutal, and definitely not for the faint-hearted, but if you give it a chance, it’ll grab you by the hand and take you on a dust-soaked ride across the wilderness to some places you’ll not soon forget.

It’s a stunning debut, and I highly recommend it. Yes, it’s going to be one of those books that I pester you about until you give in and read it. You may as well just go and read it and save yourself the nagging.

I can’t wait to find out where book 2 will take us. I just know that it can’t get here soon enough.

You can find GX Todd on twitter @GemTodd. Many thanks to Headline for the review copy.