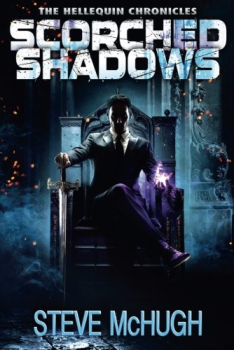 In the final chapter of the Hellequin Chronicles, secrets will be revealed, friendships tested, and destinies fulfilled.

Avalon is under siege. A shadowy cabal, headed by a mysterious figure known only as “My Liege,” has launched a series of deadly attacks across the globe, catching innocent human bystanders in the crossfire.

Emerging from the debris of battle, Nate Garrett, the sixteen-hundred-year-old sorcerer also called Hellequin, and his friends must stop My Liege once and for all. But powerful forces stand in their way. To save Avalon, they will need to enlist the help of Mordred, once Nate’s greatest nemesis, now his most formidable ally. But Mordred is grappling with a dark prophecy that could spell Nate’s doom…

The fate of the world hangs in the balance. Even if Nate can halt the war, will there be anything left worth saving?

Hugely enjoying this – it’s a fast-paced action-packed tale of magic and mayhem featuring a host of characters you’ll recognise from Arthurian legend, but brought firmly up to date. It’s always daunting (or daft) to start reading a book series on the last book, but I was assured that Scorched Shadows could be read as a standalone. Whilst this certainly appears to be true, I think you’d get a *lot* more out of it if you start at the start! That said, it’s pretty easy to catch up with the events so far. Scorched Shadows is a splendid mix of mythology and urban fantasy, the writing zips along with a nice touch of humour.

Pop over to Emma The Little Bookworm to see what Steve has to say about ‘getting round to it‘.

Scorched Shadows by Steve McHugh is published in paperback on 19th December 2017. You can find Steve on twitter SteveJMcHugh. Many thanks to @AnneCater for the blog tour invite!