Hello, lovely readers. I hope that you enjoyed my lists of top crime books (part 1: the honourable mentions, and part 2: the top five(ish). However, I know that not everyone loves crime books, and whilst I do, I also enjoy reading sci-fi and fantasy and dystopia and YA and other stuff.

So, here goes. Part 1, again with the honourable mentions. Cracking books! In no particular order… 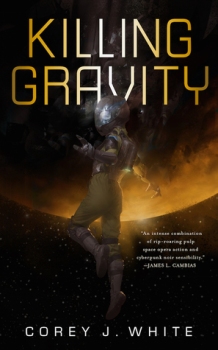 Killing Gravity is a kick-ass, whip-smart sci-fi short story/novella/novellette(?) which is a pure joy to read. It’s short, sharp and stunningly bloody, with a fiercely independent, void-damned spacewitch as the main protagonist. Echoes of Firefly abound, with a close-knit (albeit smaller) crew on a series of adventures as Mariam ‘Mars’ Xi goes on the hunt for vengeance. For such a short book, a *lot* gets crammed into the narrative.
The cast is refreshingly diverse and *interesting*, and it features what Warren Ellis described as ‘a cute space ferret of death’. Only tiny criticism would be that it was too short! The story, not the cute space ferret of death.

Meet Dr Greta Helsing, medic to the… differently alive residents of London. She looks after the capital’s supernatural inhabitants, be they vampire or vampyre (and yes, there is a difference!), ghoul, mummy or demon. The trouble is, someone is going around killing people. And that simply will not do. Dr Helsing (her family dropped the ‘van’ many years ago) must join forces with some of her patients to sort it all out.

A splendid adventure, and the underlying mystery is nicely twisty, and Dr Helsing has a splendidly quirky coterie of undead friends to aid her on her quest and in her rather peculiar practice.

Described as “a cross between Crouching Tiger, Hidden Dragon and The Godfather with magic and kung fu”, Jade City is all that and more. The magic system is both delightfully simple (jade gives its owner magical powers – the more jade the stronger the powers) and wonderfully complex. The worldbuilding is top-notch – it feels like a mishmash of a variety of different places – Hong Kong spring to mind, but with other far eastern islands layered on top, creating a unique, new-yet-familiar setting.

Similarly, the characters draw on the familiar – Yakuza, the Triads, and yes, The Godfather, but with its own unique polish. The level of detail in the world presented is fantastic – from the food, religion, clan power structures to the cars and weaponry – moon blades, and talon knives, jade giving the wearer powers, but too much in the wrong hands bringing the dreaded (and deadly) itches. The powers that Jade confers, giving us some splendid kung fu sequences. It’s all too easy to see how Jade City would rock on the big screen.

I heard Ed speak at GollanczFest in November, talking about swords and fantasy and stuff (notably bringing a landmine to a fantasy weapon-off against a dragon, a spaceship, Abhorsen’s bells and, amusingly, a comedy boxing glove filled with a horseshoe. One of those times where you *really* had to be there). I picked up Blackwing soon afterwards and cor, what a book. Brutal, dark, and bloody, it’s the story of one man’s battle to escape his destiny. It’s dark and it’s funny in places, and has some of the most imaginative, terrifying monsters you’ll ever come across. Hugely recommended.

The Sudden Appearance of Hope, by Claire North (Orbit, May 2016)

A globe-trotting jewel thief who no-one can remember. An app which promises perfection. A truly fascinating protagonist. The Sudden Appearance of Hope is a remarkable book, with a unique voice. What would you do if no-one could remember you? How would you cope? Relationships are out, and you’d struggle to get medical treatment. Every time someone met you, it’d be the first time, kind of a never-ending groundhog day.

Hope is a curious and wonderful character who is remarkable for being unremarkable, and the author really gets under Hope’s skin, with all her worries and fears and the spectrum of grey morality that Hope inhabits. The fight against Prometheus, the makers of the Perfection app, plays out this moral ambiguity beautifully – are they really the bad guys, wanting to help people become perfect? What lines will Hope cross to bring them down? Stunningly good.

Phew. My five honourable mentions. Each highly recommended, and I hope you do find something there which piques your fancy. Do let me know if you do spot something you like, or if you’ve read any of them.

Part 2 will be along soon with my top sci-fi and fantasy books of 2017. What will make the cut? Who will take the coveted #1 spot?