Today I’d like to welcome Daniel Culver to my little corner of the internet. Daniel is the author of White Midnight, which is out in mid-March from Manatee Books.

Daniel is here to talk about how he got published. Over to you, Daniel!

My route to getting published

I was never a bookish kid – the only thing I read religiously when I was younger was Tintin. I was pretty much illiterate up until the age of fifteen. But for some reason, I was compelled to be a writer (my life if fraught with things I wanted to do on a whim, many of which I’m still paying for). I wrote my first storey at 15 on a rickety old typewriter – a thriller called The Dowder Pieces. I had no idea what I was doing and God knows what the title meant, but at the time I thought it was a masterpiece. It ended up as a stack of disorganized papers, which probably made no less sense than the story itself.

If you’ve ever seen The Simpsons, where Homer is doing or talking about something important and then he gets distracted because he sees a bird outside, or starts picturing a monkey playing cymbals, that is my writing journey.

I did a lot of travelling when I was younger (more whim-ing) and in 1999 I spent six months in Asia writing and researching my first full novel – something called The Lumbini Tree. (Again, no idea?)

I was convinced this was going to be the next The Beach. It wasn’t. After a year or so of sending it (by post) to every agent in the Writer’s and Artists’ Yearbook, every one of them passed. I shelved the book – the floppy disk the thing is saved on is now a coaster in my living room. I’m too scared to look at the words I wrote again.

I then decided if I couldn’t get published as a writer, I at least wanted to work in publishing somehow, so I did (blagged my way on to) a degree in Publishing and Writing – which was the first time I ever read any of my writing to an audience aloud. It didn’t suck and actually made the whole class laugh. Although I wouldn’t end up attempting another full novel for a number of years, it did leave me thinking I might at least have potential, albeit as a side-show clown. What I lacked was an idea and any motivation to write a full novel again.
By this time I had begun working in publishing as an editor, which strangely killed any desire I had to write again and I wouldn’t attempt another novel for at least half a decade.

Several years later I had moved on. I left publishing for a bit and was working in the art industry, where I finally got the urge to write again. Entitled Vespertine Prowling, my second full novel attempt was a satire of the artworld, about an artist who fakes his own death to get famous. I thought it was amazing. But again, after being rejected by every single agent I could find, I gave up. I figured this was it, the last time. My ideas were always a little too abstract; I have always been drawn to the indie, the cult of things, over the mainstream, so I was beginning to suspect I was just not publishable.

After more setbacks and another long break from writing anything, I began to get the itch again a few years later. It just kept coming back, like herpes. I saw an ad for The Curtis Brown writing a novel course, and had an idea kicking around, which wasn’t really a novel – more a scene – but I thought what the hell. I decided to give it one last (last) shot. I told myself that if I wasn’t published before I hit 40, then that was it. Kaput. So, I did the course, started writing the novel which would eventually become White Midnight (originally called Corrosive Lemonade) and I finished the course, rushed the rest of the book, and again started submitting. To my surprise, I actually started getting full requests. A least ten of them. This was it, I kept telling myself. Until it wasn’t. One by one, most of the agents came back with rejections; some never got back to me at all (which is a different rant altogether).

But despite the rejections, I did feel closer than I ever had, so I wasn’t done yet. In a strange turn of events, at the finish of the Curtis Brown course we were invited to a ‘meet the agents evening’, which was a massive let down. It was clear the agents had little interest in any of our novels. But one agent did mention how they had recently acquired novels from two Faber Academy students. So, instead of feeling discouraged, I went home and immediately applied to do the Faber Academy course, which was due to begin a few months later. In all honesty, I did it on a whim (again) and almost forgot about it. I didn’t have a new book idea, so just submitted a small extract from White Midnight. Then I forgot all about it.

A few weeks later I got an email. I had been accepted onto the course. A course I realised I couldn’t actually afford to do, but I had started writing an outline for a new story, finally, and even had a couple of scenes. I started the course anyway (sorry), not knowing how I would be able to afford the payments, but I really wanted to do it. Then my mum passed away about a month or two into the course; she left me about enough money to cover the remainder of the course fees (thanks mum). The course was really helpful and as well as writing a new novel, I used everything I had learned to revise my previous book and on another whim, I heard about Manatee Books, so decided to submit it to them.

They replied the next day saying they would like to see the full and that was that. After several rounds of edits the thing is ready to go out into the world (and just before I turn 40, hurrah), while I am currently writing a follow up book entitled The Vacation Killer, and a third novel, as well.

The moral of this story is, don’t give up, kids. And don’t spend all your university grant money going to Asia to research a book unless you’ve outlined it first!

White Midnight by Daniel Culver is published by Manatee Books in March 2018. You can find him on twitter @DanielCulver11. 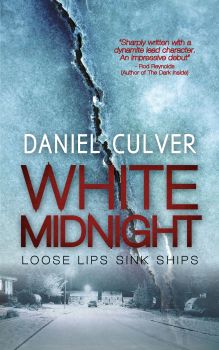 Elizabeth Nowicki, a British woman and self-confessed stoic, settles down in the seemingly idyllic American town of Midnight, with her new husband and his two children. Six months on, life as a step mom is harder than she thought, and the shine of the American Dream has already worn off.

Bored and lonely, Elizabeth is drawn into a nightmare when someone in a duck mask murders two local cops…and the investigation reaches her new neighbourhood. When this is followed by strange happenings across the street, leading to another death, Elizabeth starts to conduct her own investigation….but can she find the killer before the killer finds her?