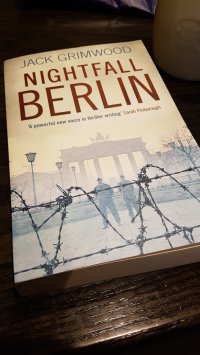 Published by Michael Joseph, May 2018
Source: review copy
In 1986, news that East-West nuclear-arms negotiations are taking place lead many to believe the Cold War may finally be thawing.
For British intelligence officer Major Tom Fox, however, it is business as usual.
Ordered to arrange the smooth repatriation of a defector, Fox is smuggled into East Berlin. But it soon becomes clear that there is more to this than an old man wishing to return home to die – a fact cruelly confirmed when Fox’s mission is fatally compromised.
Trapped in East Berlin, hunted by an army of Stasi agents and wanted for murder by those on both sides of the Wall, Fox must somehow elude capture and get out alive.
But to do so he must discover who sabotaged his mission and why…

I was delighted to be asked to kick off the blog tour for Jack Grimwood’s Nightfall Berlin. It’s a superbly drawn, deftly plotted intelligent cold war thriller, following in the footsteps of the equally excellent Moskva, but could be read as a standalone (if you must!)

Major Tom Fox has been recalled from a holiday with his wife and son to escort a defector from East Berlin. What should have been a relatively easy-in, easy-out quickly spirals out of control, leaving Fox trying to avoid capture by the Stasi and solve a murder for which he is the prime suspect, on both sides of the Wall.

I do love a good Cold War spy thriller and Nightfall Berlin is a superb example of the genre. Less glitzy than Bond, more real than Bourne, it feels utterly authentic of the time and Fox is a complex, believable protagonist. A real sense of time and particularly place too, something which I really like in a book.

Grimwood ratchets up the tension with a relentlessly as Tom Fox finds himself in increasingly perilous straits as he navigates the back streets of East Berlin and beyond. I’ve long been a fan of his books and love his way with language, drawing us into the story, sketching out the political and cultural climate of the time.

Whilst Tom Fox is a great character, he’s just one of a host of layered, complex individuals, key of which is his son Charlie who has his own story to tell. There are one or two familiar faces along for the ride as well!

Nightfall Berlin by Jack Grimwood is published on 17th May 2018 by Michael Joseph. Many thanks to Sam Deacon for inviting me to take part in the tour.

Jack Grimwood, a.k.a Jon Courtenay Grimwood was born in Malta and christened in the upturned bell of a ship. He grew up in the Far East, Britain and Scandinavia. Apart from novels he writes for national newspapers including the Times, Telegraph, Independent and Guardian. Jon is two-time winner of the BSFA Award for Best Novel, with Felaheen, and End of the World Blues. His literary novel, The Last Banquet, as Jonathan Grimwood, was shortlisted for Le Prix Montesquieu 2015.

(On a side note, Jon Courtenay Grimwood’s Arabesk books (Pashazade, Effendi and Felaheen) are bloody brilliant, and count amongst my favourites – I urge you to give them a try. Or if you prefer something a little more… vampiric and Venetian, The Fallen Blade is also superb. Enjoy!)