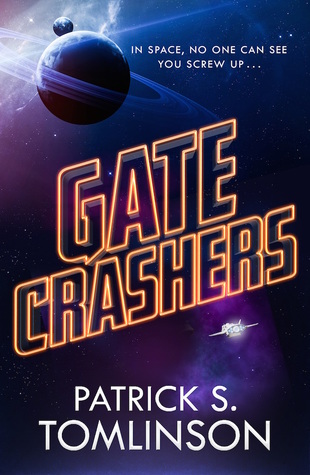 Published by Tor Books, June 2018
Source: review copy
On humanity’s first extra-solar mission, the exploration vessel Magellan discovers an alien construction. Deciding that finding advanced alien life is too important to ignore, the ship’s captain chooses to return to Earth while reverse engineering technology far beyond anything back home.

Meanwhile, at mission control, the governments struggle to maintain the existence of aliens a secret while also combating bureaucracy, the military industrial complex, and everyone else who wants a piece of the science that could sky-rocket a species into a new technological golden age.

Little does everyone involved know that the bumbling of a few highly-evolved apes in space hasn’t gone unnoticed, and humanity has put itself on a collision course with a far wider, and potentially hostile, galaxy.

Because, in space, no one can see you screw up…

It’s a galaxy-spanning tale of first contact, where the human crew of the Magellan (a brilliant character in her own right) stumble across a mysterious alien artefect sitting perfectly still in deep space.

And nothing sits perfectly still in space.

I really enjoyed this book. It’s great fun, with a cracking plot and some great characters, with shades of Douglas Adams, John Scalzi and more than a sprinking of Becky Chambers’ Long Way to a Small, Angry Planet. And those are three of my favourite things.

The ensemble cast is great, with a lovely line in witty wisecracks. The plot bounces around the galaxy, but works well. My only slight criticism is that everyone conveniently speaks English (as it’s so easy to learn!) but that’s a minor niggle and easily put to one side when you’re having this much fun.

Gate Crashers by Patrick S. Tomlinson is published by Tor Books and is out now.

PATRICK S. TOMLINSON is a man of many hats. In addition to writing Sci-Fi novels and shorts, he prowls theaters, clubs, and bars throughout the midwest performing as a stand-up comedian. Between gigs, cons, and rewrites, he works as a pundit and frequent political contributor, with columns appearing in publications such as The Hill and The New York
Times. In the little downtime remaining, Patrick enjoys hobbies such as motorcycling, model-building, and shooting. He lives in Milwaukee with his fiancee, two cats, a bearded dragon, and a 2008 Bullitt Edition Mustang named Susan.
You can find him online at www.patrickstomlinson.com and on Twitter as @stealthygeek.