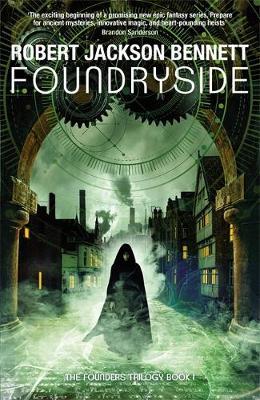 Published by Jo Fletcher Books, August 2018
Source: review copy
Sancia Grado is a thief, and a damn good one. And her latest target, a heavily guarded warehouse on Tevanne’s docks, is nothing her unique abilities can’t handle.
But unbeknownst to her, Sancia’s been sent to steal an artifact of unimaginable power, an object that could revolutionize the magical technology known as scriving. The Merchant Houses who control this magic–the art of using coded commands to imbue everyday objects with sentience–have already used it to transform Tevanne into a vast, remorseless capitalist machine. But if they can unlock the artifact’s secrets, they will rewrite the world itself to suit their aims.
Now someone in those Houses wants Sancia dead, and the artifact for themselves. And in the city of Tevanne, there’s nobody with the power to stop them.
To have a chance at surviving—and at stopping the deadly transformation that’s under way—Sancia will have to marshal unlikely allies, learn to harness the artifact’s power for herself, and undergo her own transformation, one that will turn her into something she could never have imagined.

I absolutely loved this book. Right from the off we’re thrown into the world of Sancia Grado, a thief on a job to recover something apparently innocuous from a heavily guarded warehouse. Things naturally go somewhat… awry and the adventure really kicks off. I do love a good heist story and Foundryside is packed with them, each more dangerous and daring than the last.

So far so good.

Then there’s the worldbuilding, which is incredibly imaginative and beautifully done. Foundryside exists in a kind of alternative medieval-ish Italy, with a delightfully clever magic system where rival Merchant Houses vie for power. Ancient magical artefacts, dead gods, it’s got the lot.

Is this just another ‘oh look some magic goings-on happen against a sort-of-fantasy backdrop’ kind of book?

Because then there are the characters. Sancia Grado is a wonderful kick-ass, take no prisoners heroine who naturally harbours a dark and mysterious past. But once she’s retrieved the apparently-innocuous something from the warehouse in the opening scenes, we meet one of the novels truly brilliant characters, and the interplay between the two gives this novel something unique and is just so much fun.

The story rattles along at a grand old pace, the plot is clever and bright and will leave you eager for book 2.

Often when talking about books I get asked ‘so, what else is it like?’ If I had to compare this to any other books, I’d say take a health slug of Scott Lynch’s The Lies of Locke Lamora, add in the whip-smart dialogue of Jay Kristoff’s Nevernight and sprinkle it with just a dash of China Mieville.

And these are some of my favourite things. But Foundryside is very much its own thing, and Robert Jackson Bennett has given us a cracking adventure.

This was the 35th book I’ve read this year, and it’s easily one of my favourites. I’ve not read any of RJB’s other books, but if they’re even half as good as Foundryside, I shall be a very happy reader indeed.

Very highly recommended. Add it to your lists now.