It’s nearly time for First Monday Crime again. Free on September 3rd, 2018? Get yourself down there to see Clare Mackintosh, Vicky Newham, Beth Lewis and Lucy Atkins. And not forgetting Mr Rod Reynolds on moderator duties!

Get your ticket (or tickets) here 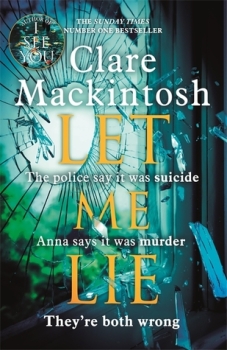 The police say it was suicide.
Anna says it was murder.
They’re both wrong.

One year ago, Caroline Johnson chose to end her life brutally: a shocking suicide planned to match that of her husband just months before. Their daughter, Anna, has struggled to come to terms with their loss ever since.

Now with a young baby of her own, Anna misses her mother more than ever and starts to question her parents’ deaths. But by digging up their past, she’ll put her future in danger. Sometimes it’s safer to let things lie…

Clare is patron of the Silver Star Society, a charity based at the John Radcliffe hospital in Oxford, which supports parents experiencing high-risk or difficult pregnancies. She lives in North Wales with her husband and their three children.

“Stand by Me” meets “True Detective” in this stunningly written tale of the darkness at the heart of a small mid-Western town and the four kids who uncover it. In the heatwave summer of 1971, four kids find a body by a lake and set out to solve a murder, but they dig too deep and ask too many questions. Larson is a town reeling in the wake of the Vietnam draft, where the unrelenting heat ruins the harvest, and the people teeter on the edge of ruin. As tension and paranoia run rife, rumors become fact, violence becomes reflex. The unrest allows the dark elements of the close-knit farming community to rise and take control, and John, Jenny, Gloria, and Rudy are about to discover that sometimes secrets are best left uncovered.

Beth Lewis was raised in the wilds of Cornwall and split her childhood between books and the beach. She has travelled extensively and has had close encounters with black bears, killer whales, and Great White sharks. She has been, at turns, a bank cashier, fire performer, juggler, and is currently a Commissioning Editor at a leading London publisher. Her debut, The Wolf Road, was shortlisted for the inaugural Glass Bell Award. Bitter Sun is her second novel.

Professor Olivia Sweetman has worked hard to achieve the life she loves, with a high-flying career as a TV presenter and historian, three children and a talented husband. But as she stands before a crowd at the launch of her new bestseller she can barely pretend to smile. Her life has spiralled into deceit and if the truth comes out, she will lose everything.

Only one person knows what Olivia has done. Vivian Tester is the socially awkward sixty-year-old housekeeper of a Sussex manor who found the Victorian diary on which Olivia’s book is based. She has now become Olivia’s unofficial research assistant. And Vivian has secrets of her own.

As events move between London, Sussex and the idyllic South of France, the relationship between these two women grows more entangled and complex. Then a bizarre act of violence changes everything.

Lucy Atkins is an award-winning feature journalist and author, as well as a Sunday Times book critic. She has written for many newspapers, including the Guardian, The Times, The Sunday Times, and the Telegraph, as well as magazines such as Psychologies, Red, Woman and Home and Grazia. She lives in Oxford.

A twisted killer has a deadly riddle for DI Maya Rahman to solve in this pulse-racing thriller, the first in an addictive new series set in East London.

A headmistress is found strangled in her East London school, her death the result of a brutal and ritualistic act of violence. Found at the scene is a single piece of card, written upon which is an ancient Buddhist precept:

I shall abstain from taking the ungiven.

At first, DI Maya Rahman can’t help but hope this is a tragic but isolated murder. Then, the second body is found.

Faced with a community steeped in secrets and prejudice, and with a serial killer on her hands, Maya must untangle the cryptic messages left at the crime scenes to solve the deadly riddle behind the murders – before the killer takes another victim.

Psychologist Vicky Newham grew up in West Sussex and taught in East London for many years, before moving to Whitstable in Kent. She studied for an MA in Creative Writing at Kingston University. Turn a Blind Eye is her debut novel. She is currently working on the next book in the series.

And last, but by no means least, our moderator Rod Reynolds, author of Cold Desert Sky, book three in his Charlie Yates series

No one wanted to say it to me, that the girls were dead. But I knew.

Late 1946 and Charlie Yates and his wife Lizzie have returned to Los Angeles, trying to stay anonymous in the city of angels.

But when Yates, back in his old job at the Pacific Journal, becomes obsessed by the disappearance of two aspiring Hollywood starlets, Nancy Hill and Julie Desjardins, he finds it leads him right back to his worst fear: legendary Mob boss Benjamin ‘Bugsy’ Siegel, a man he once crossed, and whose shadow he can’t shake.

As events move from LA to the burgeoning Palace of Sin in the desert, Las Vegas – where Siegel is preparing to open his new Hotel Casino, The Flamingo – Rod Reynolds once again shows his skill at evoking time and place. With Charlie caught between the FBI and the mob, can he possibly see who is playing who, and find out what really happened to the two girls?

Rod Reynolds was born in London and, after a successful career in advertising, working as a media buyer, he decided to get serious about writing. He completed City University’s Crime Writing Masters degree and the rights to his debut novel, THE DARK INSIDE, were acquired by Faber even before he graduated. The sequel, BLACK NIGHT FALLING, was published in 2017 and the third book in the Charlie Yates series, COLD DESERT SKY, is out now. Rod lives in London with his wife and two daughters.