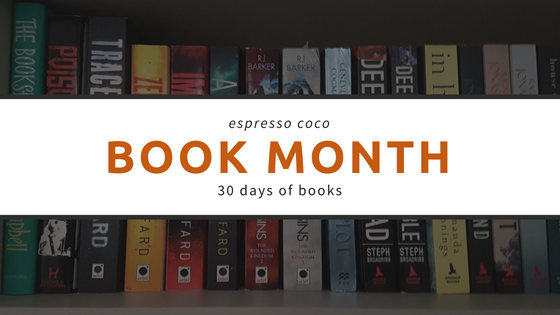 Day 3 of Book Month and we turn our attention to the wonderful world of science fiction. I love sci-fi. Some of the first ‘grown-up’ books I read were science fiction – my dad was a huge fan and had a small stash by his bedside table and on a tiny bookshelf in his office at work.

I picked up Harry Harrison’s The Stainless Steel Rat and was hooked. It’s a corking read which zips along without pausing for breath. The thing I love about old sci-fi books is that they’re short, skinny little paperbacks that you can get through in a couple of hours, but packed with excitement, adventure and really wild stuff. This is the story of Slippery Jim DiGriz, ace con-man, and titular Stainless Steel Rat, and his recruitment into the Special Corps, run by criminals to catch criminals. Who better to catch a thief than another thief? Brilliant.

Then there was The Hitchhiker’s Guide To The Galaxy, which ought to need no introduction. If you haven’t read it, what have you been doing with your life?

I read a *lot* of sci-fi in my teenage years. Dune was (and indeed is) fabulous (and possibly Dune Messiah and maybe Children of Dune, but please stop after that and especially before you get to Heretics of Dune which is just batshit crazy).

Then  in the late eighties (yes, I am that old) I discovered one Iain M. Banks, and Consider Phlebas.  Oh my. It introduced the term ‘space opera’ into my vocabulary and science fiction was never quite the same. I love all of his books, but if I had to pick a favourite it would have to be Against a Dark Background which is oh so very dark, and has the Lazy Guns, which are just completely brilliant. Excession is also a favourite, if only for the Ships squabbling.

Moving onto the mid-nineties and I came across a book marketed as ‘a cross between Blade Runner and The Hitch-Hiker’s Guide to the Galaxy’. It’s neither one nor the other, but Michael Marshall Smith’s Only Forward is an entirely original blend of smart-talking protagonist, weird & wonderful situations and locations, holding together a dark, funny, unforgettable story. This is the book I’m most likely to recommend to you on any given day. You should also go read his other books too (including his latest, The Anomaly, written as Michael Rutger. Huge fun.) Spares

is a very close second behind Only Forward in my book, and some of his short stories are utterly superb, very dark, scary, thought-provoking and funny. If you happen to come across a copy of his collected short stories, More Tomorrow & Other Stories

, snap it up. It was only a short print run, but is a great collection. Failing that, go for What You Make It: Selected Short Stories

, a shorter collection in paperback.

This post could easily turn into a series broken down by decade if I’m not careful, so let’s move quickly along.

Recently loved sci-fi, a short (hah!) list, in no particular order (other than that which I probably read them)

The Gone-Away World, and Angelmaker, by Nick Harkaway. Just stunningly good. Angelmaker is:

“gangster noir meets howling absurdist comedy as the forces of good square off against the forces of evil, and only an unassuming clockwork repairman and an octogenarian former superspy can save the world from total destruction.”

The Red Rising trilogy (Red Rising, Golden Son and Morning Star), by Pierce Brown. I love these books, and have recommended them to more people than I could comfortably count, the vast majority of whom have gone ‘cor, they were a bit good, eh?’ I also met Pierce at the Hodder HQ Howler Party (namedrop) and he’s thoroughly awesome as well as being a bloody good writer. I hate him. 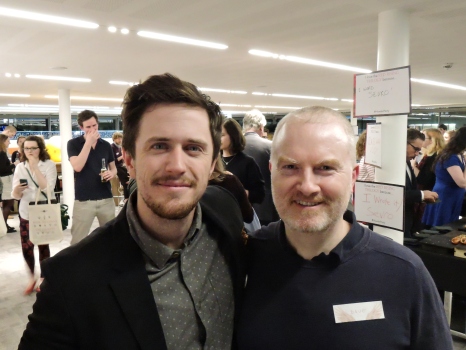 The Martian, by Andy Weir. Huge amount of fun,  I loved Mark Watney’s adventures on Mars, MacGyvering his way out of being stranded a long, long way from home. (Wasn’t so keen on Artemis, mind you, though it’ll probably make a cracking film if they get the casting right).

The Long Way to a Small, Angry Planet, by Becky Chambers, and the sequel, A Closed and Common Orbit. Utterly lovely, heartwarming, heartbreaking science fiction of the finest kind.

Here’s Becky talking about her book. If you don’t want to read it after this…

Tracer, by Rob Boffard (plus books 2 and 3 of his Outer Earth trilogy, Zero-G and Impact).  Another author I’ve met in person! A very sunny day in Leeds, where I interrupted Rob and his publicist having lunch to get my book signed 🙂 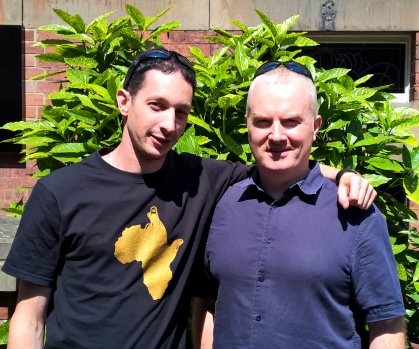 Top bloke, fantastic writer and possibly the only author who does book reviews in rap form.

and launching a book into space to be the first author reading in space. SPACE!

Defender and Hunted, by GX Todd. Now then. I struggled with whether to include these in the science fiction section. As Gem herself will tell you, they’re pretty hard to classify – part horror, part dystopia, part this, part that. They are both brilliant though, but be warned, Hunted turns you inside out along the way. The plotting is intricately woven through multiple viewpoints, multiple strands and the characters, oh the characters we meet. They’re complex, layered, always fascinating, often frustrating, and sometimes infuriating, but so utterly believable, facing down challenge after challenge, and when you think they can’t possibly take any more…, and you are *not* ready for that ending.

Oh, and I also met Gem at Edge-Lit, and she’s also lovely. What is it with authors who write such dark stories being so utterly nice? There’s a blog post in there somewhere. Sadly I didn’t get a photo with her. Maybe next time…

The Collapsing Empire by John Scalzi (Redshirts is also brilliant). I just loved this from the first page. Fast-paced, with funny dialogue which fizzes with snark and a glorious cast of characters. We’ve got grand Houses battling for influence with the Emperox, wormholes, sarcastic space captains, pirates, dukes and a glorious cast of minor players in the empire-spanning game of power.

Killing Gravity is a kick-ass, whip-smart sci-fi short story/novella/novellette(?) which is a pure joy to read. It’s short, sharp and stunningly bloody, with a fiercely independent, void-damned spacewitch as the main protagonist. Echoes of Firefly abound, with a close-knit (albeit smaller) crew on a series of adventures as Mariam ‘Mars’ Xi goes on the hunt for vengeance. For such a short book, a *lot* gets crammed into the narrative.

The cast is refreshingly diverse and interesting, and it features what Warren Ellis described as ‘a cute space ferret of death’. Tell me you’re not intrigued!

Everything About You, by Heather Child. Last on the list, and by no means least. I met Heather at Edge-Lit for her dystopian futures workshop which was brilliant and fascinating, and not a little scary.

Everything About You is an unsettling, creepy techno-thriller which feels all too plausible. Echoes of Black Mirror abound as we follow the story of Freya and her new ‘Smartface’ virtual assistant. Technology has advanced to the point where you can have any personality installed you like, built up from the thousands of interactions that person had with others – emails, texts, voice. Except Freya has a new, bleeding-edge prototype and the voice of her missing sister, who vanished when they were teenagers.

The Smartface knows everything about you, everything you want, everything you need. It feels alive, it feels real. All of which is eerie enough, except that this AI seems to know things that her sister couldn’t possibly know…

Right, there we go. That got a bit on the long side, but hey, we’re all book lovers here together, right? What’s your favourite sci-fi book? Have you read any of my favourites? As ever, I’d love to hear what you think.