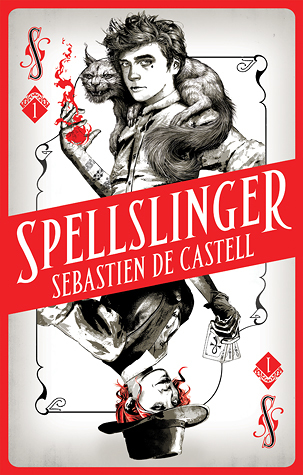 Hot Key Books, May 2017
Source: own copy
There are three things that earn you a man’s name among the Jan’Tep. The first is to demonstrate the strength to defend your family. The second is to prove you can perform the high magic that defines our people. The third is simply to reach the age of sixteen. I was a few weeks shy of my birthday when I learned that I wouldn’t be doing any of those things.

Magic is a con game.

Kellen is moments away from facing his first mage’s duel and the start of four trials that will make him a spellcaster. There’s just one problem: his magic is gone. As his sixteenth birthday approaches, Kellen falls back on his cunning in a bid to avoid total disgrace. But when a daring stranger arrives in town, she challenges Kellen to take a different path. Ferius Parfax is one of the mysterious Argosi – a traveller who lives by her wits and the three decks of cards she carries. She’s difficult and unpredictable, but she may be Kellen’s only hope…

I picked Spellslinger up at the recommendation of Nazia from Orbit Books, who mentioned something called ‘squirrel cats’.

I was intrigued. I was already reading half a dozen other books for reviews, but discovered it was crazy cheap on Amazon (I’m a sucker for a good deal on kindle books) so bought it.

And promptly devoured it over the course of  a day or two. The story has everything – brilliant characters, pacy plot, superb worldbuilding and a new take on magic. Oh, and a feisty, snarky squirrel cat called Reichis who might just remind you a little of Rocket Raccoon from Guardians of the Galaxy.

We’ve all read fantasy stories where the young protagonist comes into their powers and go off to fulfill their destiny. This is the story of what happens when those powers don’t, but you’re left to get on with the whole destiny thing. It’s a YA fantasy with a wild west twist, a magic system which is intriguingly different, and some fantastic (and funny) banter between the characters.

So, thanks Nazia for pointing me in the direction of Spellslinger. I’ve now got a few more books in the series to catch up on before book 4 comes out in October.