Delighted to be taking part in the blog tour for Mason Ball’s The Thirty Five Timely and Untimely Deaths of Cumberland County. More on that later.

Mason has dropped by to let us know ‘Ten Things You Didn’t Know About Me’.

Over to you, Mason

#1 A painted fool
When not writing, I am a cabaret performer and award-winning emcee. As ‘Benjamin Louche’ I’ve hosted and appeared in shows up and down the UK, as well as in Europe and America. For the last nine years, along with my wife Rose Thorne, I have co-produced and hosted monthly cabaret show The Double R Club (inspired by the world of David Lynch).

#2 An explosive debut
I wrote my first poem, entitled Fireworks, Fireworks, Bang, Bang, Bang at the age of six: (transcribed from original)

Fireworks Fireworks bang bang bang.
They are pretty.
They Sparkle in the night.
Thhey spray some colours
They light the sky.
They are golden.
Whizz whizz they go.
The Catherine wheel gose round.
They spray a rash of stars in The dark.

#3 Cheers
I first tried gin when, at the bar, I ordered a beer and my friend Kris ordered a G&T. I ridiculed him good-naturedly for the next half an hour, then when we returned to the bar he suggested I try one; It’s been my drink ever since. For this, and for many, many other reasons, #35Deaths is dedicated, in part, to Kris. My favourite gin at the moment is probably Tanqueray Ten (gifts are always welcome).

#4 What’s the opposite of hagiography?
While at London Metropolitan University as a mature student, I won the Sandra Ashman Prize for my poem Mother Teresa in the Winner’s Enclosure. This was the first time I’d received money for something I’d written and as such it somewhat blew my tiny mind.

#5 Banana Man
Until the crowdfunding campaign for #35Deaths I had never eaten a banana. Yes, I know it’s weird. I promised when I reached a certain percentage that not only would I eat one, but that I would film it, in full cabaret garb, for people’s ‘entertainment’; which I did. The verdict was that I am not a fan of the banana.

#6 Like fingernails on a blackboard
The over-amplified sound of the pouring of carbonated drinks in TV adverts set my teeth on edge and drives me mad!

#7 Fleeing the scene of the crime…?
I was born in Essex, but I escaped.

#8 Hot chocolate
I once dressed up as a bar of chocolate to promote Walker’s crisps. Another performer dressed as a chili and together we represented the Chili Choc flavour on the Walker’s website. Our slogan was “where sweet meats heat!” The guy playing chili was a street dancer however and when we attempted a humorous ‘chest bump’ I went flying and cracked my head on the concrete floor, thus screwing up ex-footballer Gary Lineker’s dialogue to camera.

#9 Who am I?
As a child at playschool / kindergarten, I would wear a different hat every day: fireman’s hat, crash helmet, baseball cap, gangster’s trilby, army officer’s cap etc. I think these days they call that multiple personality disorder…

#10 “May the force be with you”
I appeared in Star Wars, episode VII: The Force Awakens, and Star Wars, episode VIII: The Last Jedi as a creature performer; in the former as Praster Ommlen, and in the latter as Sosear Latta -as Sosear Latta I was photographed by Annie Leibovitz! I was also a Vogon in The Hitchhiker’s Guide to The Galaxy and a mummy in The Mummy and The Mummy returns.

The Thirty Five Timely and Untimely Deaths of Cumberland County, by Mason Ball is published by Unbound. You can find Mason on twitter @MasonBallAuthor.

Many thanks to Anne Cater and Mason Ball for inviting me onto the blog tour. 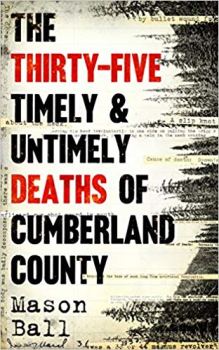 The dying years of the great depression; John Bischoffberger is a Pennsylvanian doctor adrift in Naples, Maine, struggling with his loss of religious faith and retreating from painful memories of The Great War.

As Medical Examiner John must document deaths that occur under unusual or suspicious circumstances. Yet as he goes about his work, he begins to suspect that the deaths he is called upon to deal with are in fact far from routine.

He becomes convinced that three itinerants are going about the county, killing. An old woman, a little girl, and a thin man are fulfilling some strange and unspoken duty, brutally murdering men, women and children; and the deaths seem to be drawing closer to John: others who may suspect foul play, then acquaintances of his, then perhaps friends, even family members.

As the storm clouds of a new world war gather in Europe, and John’s rationality slowly unravels, he must find a way to disprove what he has reluctantly come to believe, or to confirm his worst fears and take steps to end the killing spree of the three in the woods, whatever the cost. 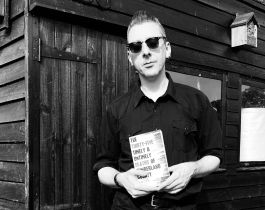 Following his poem Fireworks Fireworks Bang Bang Bang at the age of six, Mason eventually took the whole writing thing a little more seriously, graduating in 2009 from London Metropolitan University, having received first class honours in Creative Writing. In his second year, he won the Sandra Ashman award for his poem Mother Theresa in the Winner’s Enclosure. He has subsequently had work published in Succour magazine and Brand magazine.
Mason is currently working on a number of writing projects, as well as developing his next novel. In addition to this, he writes, co-produces and hosts the award-winning monthly cabaret night The Double R Club (as Benjamin Louche, winner of “Best Host” at the London Cabaret Awards). He also worked as a performer on Star Wars: The Force Awakens & The Last Jedi.
Mason is a trustee of East London charity Cabaret vs Cancer. He lives in East London with his wife, a cat called Monkey, and a collection of antique medical equipment.