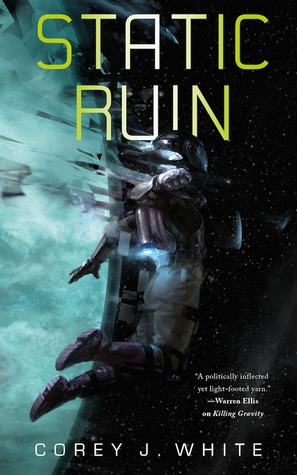 She killed the man who trained her. She killed the fleet that came for her. She killed the planet that caged her. Now she must confront her father.
Mars Xi is on the run, a bounty on her head and a kill count on her conscience. All she has left are her mutant cat Ocho and her fellow human weapon Pale, a young boy wracked by seizures who can kill with a thought. She needs him treated, and she needs to escape, and the only thread left to pull is her frayed connection to her father, Marius Teo. That thread will take her to the outskirts of the galaxy, to grapple with witch-cults and privately-owned planets, and into the hands of the man who engineered her birth.

This is the third (and final?) book in Corey J. White’s Voidwitch Saga, the first being the splendid Killing Gravity (a ‘a kick-ass, whip-smart sci-fi short story/novella’). Book 2, Void Black Shadow continued in much the same vein. Mars Xi, genetically engineered psychic voidwitch is on a mission to retrieve one of her friends, and woe betide anyone who gets in her way.

These books are bloody, brutal and relentless. And cracking entertainment. Mars is brilliantly acerbic and pissed off with anyone who gets between her and her target, which turns out to be 90% of the people we meet. So much blood.

So much mayhem. So much fun.

And so we find ourselves at book 3, Static Ruin. Its publication sort of snuck up on me, and I dashed off to buy a copy as soon as I found out that it was already A Thing.

If you’ve already read the first two books (and if you haven’t, what are you waiting for?), you’ll know exactly what to expect. Mars Xi is on her final trajectory, aiming to find the man who made her. Mars is delightfully unpleasant to a whole host of new people, though the action is somewhat more measured in pace from the at times frantic bloodbath of the first two parts. The stakes are higher this time around and Mars faces some tough realities on her quest for answers. We’ve seen in the other books that no-one is safe, and the same is very much true here.

We’re introduced to some new faces (well, Mars did kill an awful lot of people thus far) as well as some old favourites – I particularly love Ocho, and Mars’ super protective attitude to her “cute space ferret of death” (as described by Warren Ellis).

As you can probably tell, I bloody loved these books. Highly recommended.

Static Ruin by Corey J. White was published in November 2018 by Tor.com. You can find Corey over at his website, coreyjwhite.com or on twitter @cjwhite

You can get a copy here (affiliate links)