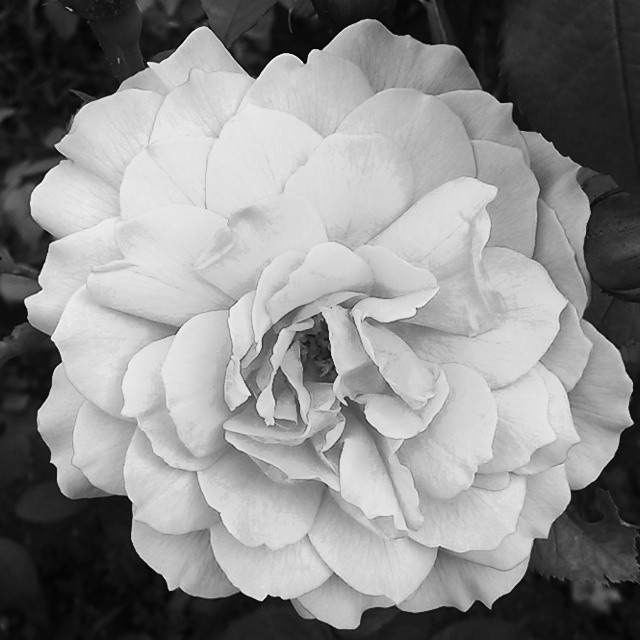 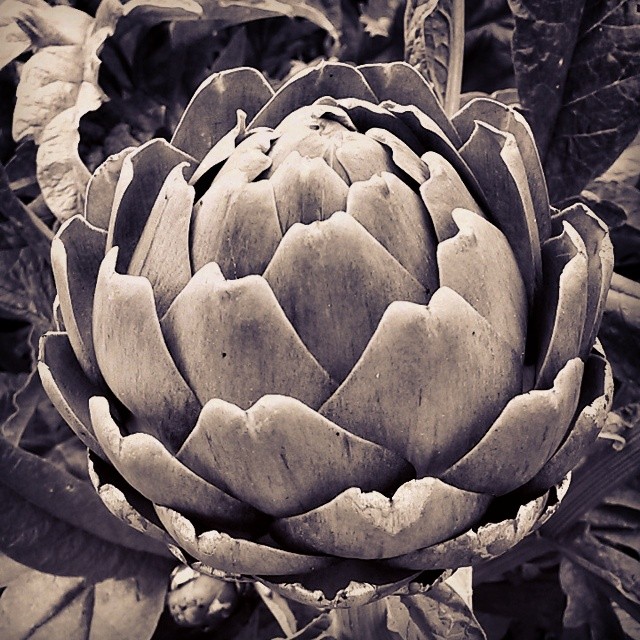 Experimenting with black & white. ok, the second one is an artichoke…

and allotmenteering. We grew this! Beautiful *and* tasty.

The gooseberries down the allotment are coming along nicely.

Jerusalem artichokes, that is.

I spent a couple of hours down at the allotment digging this lot up.

Now, we love Jerusalem artichokes. We planted a crop a couple of years ago in a little patch on the allotment and soon had vast quantities of them. We gave bagfuls away to various friends on a fairly regular basis. Huge, huge crop. Last autumn, I dug up all but six plants (or so I thought).

The trouble with the humble Jerusalem artichoke (apart from the… ahem… effects it can have) is that whilst it’s relatively easy to grow, the hard bit is getting it to *stop* growing.

Today, for example. Those six shoots had multiplied, and were covering an area about a metre and a half square. I set to, digging them up. This time, no artichokes would remain.

Some of the shoots had tiny little tubers, so I saved some for a friend. Cute, aren’t they?

As I said, these little blighters spread, so you’ve got to be careful. The tiniest bit of tuber left in the ground *will* quite cheerfully sprout, and will proceed to take over as much space as they can. They’re like triffids, albeit very tasty ones.

They’re also incredibly fragile. You can just look at a shoot in the wrong way and it’ll snap. And the worst thing you can hear when attempting to clear a plot of artichokes is the little *crack* of an artichoke breaking.

It’s like the tuber is going ‘aha! You won’t get rid of me *that* easily!’ before burrowing deep, only to reappear weeks later.

And, no matter how carefully you dig, there’s always one you’ve missed…

Week 3, and the allotment is coming along nicely – the damson trees are full of fruit, and the apples are ripening nicely. We’ve got tomato plants in and have sown peas at one end of the plot.

We’ve shifted 2 huge builders’ bags of plants we’ve dug up, and another one is full ready for a trip to the tip. Maybe we could have composted some of it, but there were nettles and docks in amongst it.

I’ve been clearing the other end too – it seems like a shame to ditch the potatoes, but after a bad few, it’s not worth the hassle. Clear ’em out, get some new stuff in instead.

I’ve started clearing a pathway between our half-plot and our neighbour’s half – we’re supposed to leave 9″ either side of the dividing line, so as the neighbour has been away and hasn’t seen their plot yet, I’ve been clearing either side of the line to make the path. We’ve got some board for our edge, and some old carpet to put down for the path.

Last night our neighbour Mark and I were having a chat and he gave me a seed tray full of leek seedlings as he’s got too many. Should get them in tonight, hopefully! Hooray for generous allotment neighbours!

Bites: 5 – 3 on legs from last 2 weeks (now wearing long trousers for digging) and two on my right arm from last night. Hoping those two don’t go the way of the other three, which itched like crazy, hurt, and left painful bruises.

Also my copy of One Man and His Dig: Adventures of an Allotment Novice

finally arrived from Amazon last night. Looks jolly amusing, but too tired to actually read it!

Digging the allotment last night. I foolishly decided to wear shorts and yes, I got bitten by another %$*(£%*$(ing mosquito.

damn, but they hurt.

The last bites took a week to sort themselves out and I was left with bruises a couple of inches across on both legs.

Note to Self: wear long trousers when digging, no matter how warm it is.

in other news, the allotment is coming along nicely – we’ve dug out under the damson trees (absolutely bulging with fruit) and cleared a bit next to the path and put tomatoes and peas in.

Took a crop of redcurrants and whitecurrants and made some jolly tasty redcurrant jelly last weekend, which was hard work but great fun, and tasted delicious.

Also started clearing the path between our allotment and the other half allotment. Apparently we need to leave 9″ either side of the centre line, so I’ve been running an 18″ strip down the middle and putting old carpet down as a path between the two.

We’ve also put weed-resistant matting and old groundsheets over the centre section to stop the weed growth whilst we sort the rest out, and started clearing the far end.

You’re curious why we’re covering the middle, aren’t you?

It’s because at the far end there are loads of potato plants, and therefore loads of tasty new potatoes growing. We dug up a carrier bag full the other day, and I dug up another kilo or so last night.

Annoyingly, the veg box we get delivered also has potatoes in this week and we forgot to change the order. Anyone for spuds?

Ah, a nice new blog to talk about my nice new allotment.

We found out on friday – we’ve been on the waiting list for 8 years, give or take. Turns out they had one going spare as the guy who used to have it passed away last year, but the council hadn’t sorted out transferring it to the next person on the list. It would have been nice to have it earlier in the year so we could get some more stuff in this year, but heigh ho.

It’s a half plot, so is about 5m by 20m. And boy, is it overgrown. Poppies to shoulder height, *massive* dock leaves, nettles, the works.

But, it’s only been uncultivated for a year, so nothing *too* serious going on in there. And as we were having a look at it, one of our other neighbours turned up and said that he had a petrol strimmer on loan from the school and would happily strim it all down for us.

We’ve gone for the right hand side of the plot – it’s got an apple tree and two damson trees on it already, plus redcurrants.

The other half had redcurrants and blackcurrants, but no fruit trees. Our half is slightly more shady as the plot next to it has loads of apple trees, but still gets a good lot of sun for most of the day.

Very excited. Lots of hard work, but we’ll finally get to grow decent amounts of our own fruit and veg, and can put the garden back to being a garden rather than having veggies crammed in everywhere. K’s mum is also excited as she’ll be able to use some of it and get her garden back.

Also, our neighbour has just built his own apple press so he can make his own cider. Hmm. Perhaps a pear tree is next…