Brendan Foley has worked to balance the responsibilities of a demanding job and a troublesome family. He’s managed to keep these two worlds separate, until the discovery of a mass grave sends them into a headlong collision. When one of the dead turns out to be a familiar face, he’s taken off the case.

Iona Madison keeps everything under control. She works hard as a detective sergeant and trains harder as a boxer. But when her superior, DI Foley, is removed from the case, her certainties are tested like never before.

With stories of the Warrington 27 plastered over the news, they set out to solve the crime before anyone else. The local constabulary is small and under-funded – Brendan knows they can’t crack this case alone, and he’s not letting a rival force take over. Not with the secrets he fears are lurking. Their investigations lead them into the murky underworlds of Manchester and Liverpool, where one more murder means little to drug-dealing gangs, desperate to control their power bases.

But as Madison steps into the ring for the fight of her life, the criminals come to them. It’s no coincidence that the corpses have been buried in Foley’s hometown. The question is, why? Foley might not like the answer…

Browsing through the titles on Audible a while back I discovered Far From The Tree, an ‘Audible Original’. I’ve only read one other of Rob Parker’s books (the brilliant A Wanted Man) so jumped at the chance to have a listen to this.

Twenty seven bodies are found in an unmarked grave. Is this the work of a serial killer? DI Brendan Foley is on the case. Then it turns out that one of the dead is someone close to home, and what was initially ‘just’ a murder enquiry turns into something a lot more personal.

It’s a great story, and I loved the interplay between Foley and DS Madison as they work to uncover exactly what has been going on. There’s a real grittiness to the story, which feels worryingly plausible. It’s also not one for the faint-hearted, with some seriously visceral scenes of violence. It’s a story of family, of the hard men who run the streets and what they’ll do to keep control.

I love a good crime story, and this one is absolutely top notch. It’s got a real sense of place, which regular readers of this blog will know is something I really look for in a book. Parker is clearly at home here, and you can tell it’s his patch.

With audiobooks, the narration can be the make or break for me. Fortunately Far From The Tree is superbly narrated by Warren Brown (DS Ripley from Luther), I loved every minute of the near nine hour runtime. I’d plug my headphones in whilst walking the dogs, and must admit to going just once more around the block to get another chapter in. The dogs didn’t seem to mind!

Far From The Tree by Rob Parker, read by Warren Brown, is available exclusively on Audible.

Delighted to be taking part in Orenda Books’ Audio Week, where a host of awesome bloggers (and me) are reviewing the audiobook versions of some fantastic Orenda titles. Plus I’ve got *two* copies of Johana Gustawsson’s Block 46 audiobook to give away! More on that later. 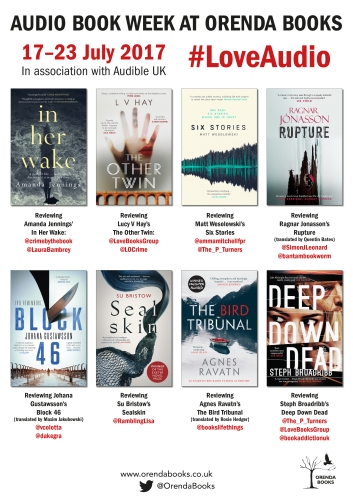 Falkenberg, Sweden. The mutilated body of talented young jewellery designer, Linnea Blix, is found in a snow-swept marina. Hampstead Heath, London. The body of a young boy is discovered with similar wounds to Linnea’s. Buchenwald Concentration Camp, 1944. In the midst of the hell of the Holocaust, Erich Hebner will do anything to see himself as a human again. Are the two murders the work of a serial killer, and how are they connected to shocking events at Buchenwald? Emily Roy, a profiler on loan to Scotland Yard from the Canadian Royal Mounted Police, joins up with Linnea’s friend, French true-crime writer Alexis Castells, to investigate the puzzling case. They travel between Sweden and London, and then deep into the past, as a startling and terrifying connection comes to light.

Firstly, the story. It’s dark and often horrific, told in part through flashbacks to the Buchenwald Concentration Camp towards the end of the Second World War. The characters here are twisted and barbaric in their treatment of the prisoners, and you’re dragged along through the story of Erich Hebner as he does what he needs to do to survive. How this then links to the murder of Linnea Blix in the present, or to the murders of a young boy in London, is what drives this story.

The characters are brilliantly realised – I loved Emily Roy and Alexis Castells in particular as they unpick the unpleasant clues behind these horrific murders. There’s a real international feel to the book – written by a French author (and here translated into English by Maxim Jakubowski), with the action moving from Falkenberg in Sweden to London, with a Canadian Behavioural Insight Analyst (Roy) and a French crime writer based in London (Castells). Regular readers of this blog know of my love of books which give you a sense of place, and Block 46 delivers this in spades, across the various locations in the book.

The audiobook is narrated by Patricia Rodriguez and Mark Meadows. If I had any criticism, I found Patricia’s delivery to be a little too measured and slow. However, the great thing about the Audible app is that you can alter the speed of the narration. I found that by bumping it up fractionally to 1.25x speed, the delivery felt better for me, and I got through the book quicker – always useful when you’ve got a lot of other books to read! The shift between Rodriguez and Meadows as narrators worked really well and really gave the story an extra dimension.

Karen at Orenda Books has given me TWO copies of the audiobook to give away – leave a comment here on the blog, or retweet a link to this post – I’ll pop all the names into a random number generator next week and announce the winners on twitter. You’ll need an account at audible.co.uk though!

You can find Johana Gustawsson on twitter @JoGustawsson. Block 46 is published by Orenda Books.