Day 6 of Blog Every Day In November and today we’re talking about stress as today is National Stress Awareness Day.

What do you when you get stressed? I like to juggle.

I’ve talked about juggling before on the blog, so I won’t repeat myself too much. I’ve been juggling since I was at university *cough* years ago and I find it enormously relaxing. That said, I can actually juggle – I can see how if you’re a non-juggler that it might just add to the stress!

There’s something hypnotic about juggling. It forces you to be in the moment. All other worries fade to one side as you get into the rhythm of throw, catch, throw, catch. It’s all very zen (and there’s an excellent book called The Zen of Juggling by Dave Finnigan).

I’ve taught quite a few people to juggle over the years too – and you’d be surprised at how many of them started with “oh, I couldn’t possibly/I’m too clumsy/I’ve got no co-ordination”

Can you juggle? Do you find it relaxing?

What other stress-relieving tips do you have?

Day 24 of #DaBloPoMo. Time for another recap. Last time we did one of these was day… [checks] ten! blimey. Doesn’t time fly.

Since then we met my juggling nemesis, namely my set of juggling clubs, which I *will* learn this year. I took a funky photo of an apple, talked Moleskines, then introduced you to Umphrey’s McGee.

Immediately after that we had The Great Mug Incident, then things went a bit photo-heavy. We called in at the beautiful Fountain’s Abbey, took some long exposure photos, asked if it was art.

Blue skies over the Yorkshire Sculpture Park were followed by a Leeds sunset before heading back to the YSPfor some Jaume Plensa.

Then came the highlight of my month so far. Yet another sunset photo, but this one I was particularly proud of. It made it into Flickr’s Explore! Woo!

This prompted a musing as to whether it’s a popularity contest (or not).

I briefly talked about the joys of the Fitbit One, and the reasons why I sold mine. I sort of miss it.

I’m a keen juggler. I’ve been juggling since I went to university, oh *mumble* years ago. Over the years I’ve practiced on and off, and have got to the point where I can do a convincing three-ball juggling routine fairly smoothly.

I’ve heard it said that juggling 3 balls, on a scale of 1 to 10, is about a two, maybe three. Juggling four balls (which I can do, just about) comes in at about a seven.

Juggling five? About a hundred. It’s that much more difficult – with three you’ve got a lot of time (no, really) between throws and catches. You can be a bit erratic (often for comic effect) and still keep the cascade going.

With four, you’re juggling a different pattern – two balls in each hand, and keeping them in synch. You can practice your weaker hand easily and it doesn’t take too long to get the hang of it.

Five is a different beast. Same base pattern (the figure of eight cascade),but the balls are going higher and the speed notches up. You no longer have the luxury of time to correct any wonky throws with five – you’ve got three balls airborne to keep track of now, unlike juggling three where you’ve essentially got a ball in each hand and one in the air, most of the time.

Starting with five is also harder as you’ve got three balls in your good hand and two in the other, and you’re trying to launch one of the three in a perfect arc, leaving the other two. Five ball juggling often involves smaller balls!

This year I’m determined to at least get a basic cascade going with five.

Now, meet my other nemesis. The juggling clubs. I bought these bad boys in a shop in Islington many years ago. If I practice really hard, I can *just* about get a couple of spins in before they clatter to the floor (or, more usually, off my shins. Ouch). I also want to get to the point where I can do a fairly fluent three club cascade after an incident where Ed told his mates that I was a really good juggler and handed me my clubs. Never again… 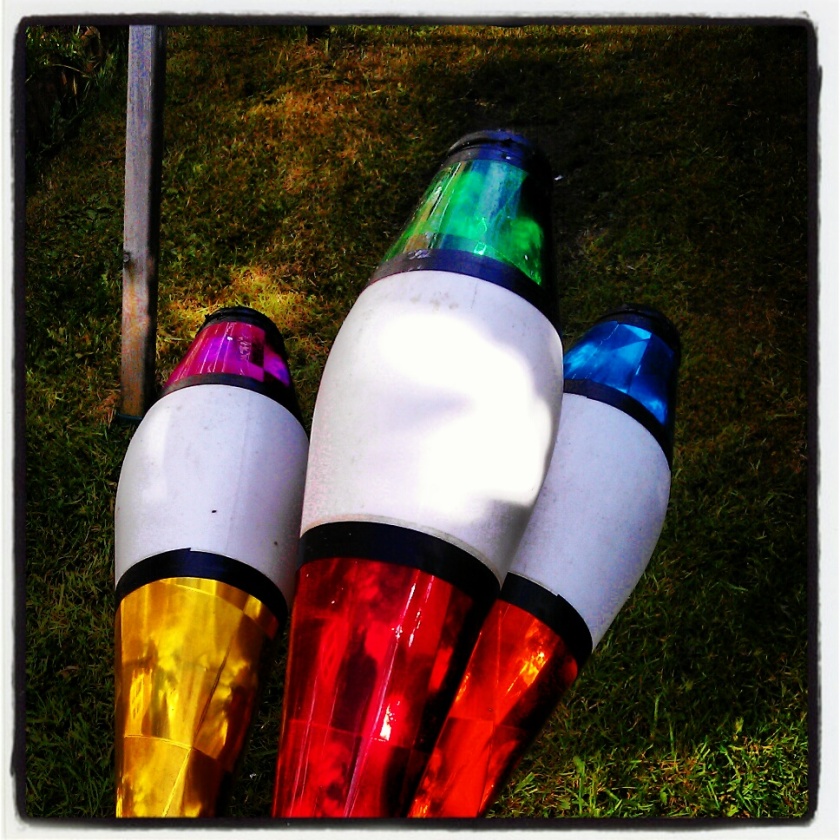 I’ve finally been reacquainted with this beauty, which I got for my 21st birthday present. Yes, it was a long time ago. I fully intend to clean ‘er up and teach myself to not fall off. THIS YEAR. 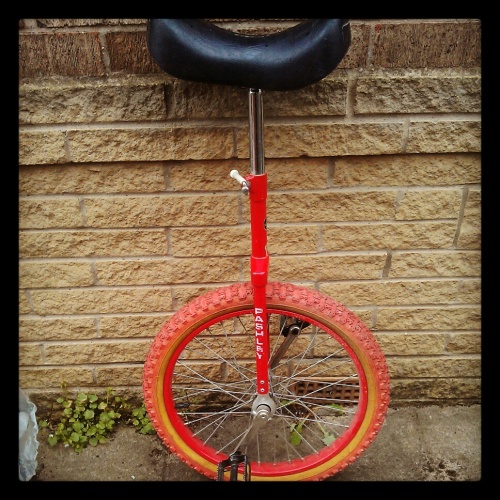 [edit] YT, juggling four. Juggling balls are hybrids, from the lovely folk at Tossaball Juggling. Tell them I sent you. 🙂 And yes, i’m juggling in a tent. Long story.

Playing with an acrylic juggling ball, which is great fun for both juggling *and* photography.

I’m not so great at the juggling though – I’d love to be able to do the stuff that went on in Labyrinth. It was actually a guy called Michael Moschen who did all the crystal ball juggling. He’s ace.

He did a performance at TED in 2002: Michael Moschen juggles rhythm and motion (can’t get the embed to work, sorry!)

Or Okotanpe, playing a park in Japan. Seriously, just take a few minutes and watch. Thank me later.

stay with it past the first minute. This guy is *really* good.

I once heard a theory about juggling. Juggling three balls, on a scale of 1 to ten, ranks about a three or a four.

Juggling four balls, up to about 8 out of ten.

That kind of crystal ball manipulation? We’re into thousands.

I can teach you to juggle three balls in an hour or two[1]. A couple of hours of decent practice more, and you’ll be at the point where you can impress non-jugglers with your newly-found skills, and be thinking about doing some tricks.

Juggling five is an order of magnitude more difficult – throws are necessarily higher, and have to be far more precise as you just don’t have the time to constantly readjust the pattern. And picking up five is hard on the back. 🙂

Crystal ball manipulation? It’ll take you weeks to get even remotely smooth with a simple ball-over-the-hand. And that’s with your good hand. Doing the spinny four-ball pyramid? Hard.

Doing what the guy in the video does? Years of practice.

Beautiful to watch though. One day I hope to be half as good as that.

Now, where did I put my crystal ball?

[1]No, really I can. You might be shaky on it, but it’s perfectly possible, assuming you can throw and catch one ball from one hand to the other.