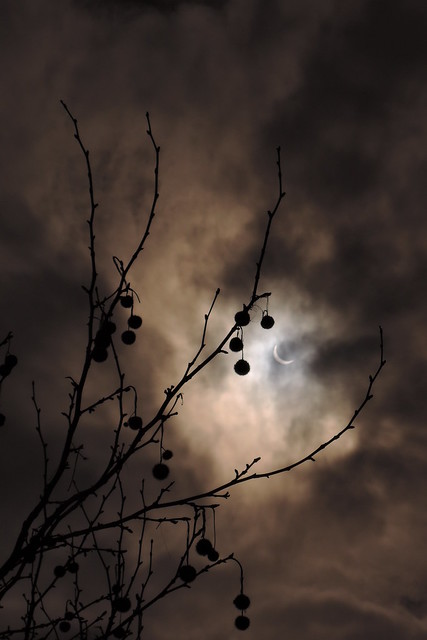 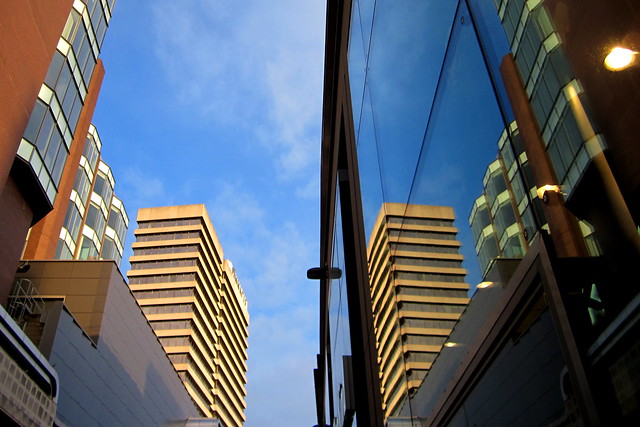 One key part of my ‘create’ theme for the year is to get back into taking photos regularly. I’ve been watching a great set of lessons on Skillshare – Street Photography: Capture the life of your city.

It’s run by photographer Trashhand and consists of 15 short videos around a central 4-photo assignment. In it we’re asked to go out and show our city in four categories – street portraits, look up, motion and night. Each theme is broken down into a session where Trashhand looks at photos he’s taken and talks us through how and why he made the photographs. Fascinating stuff.

You’re then asked to put together your own four photos for an assignment, and comment on each other’s work. I’ve always been a fan of the ‘look up’ photography, especially as Leeds has some fantastic (and some not-so-fantastic) architecture.

I took a few shots on the walk up to work and will decide later which one to submit for my assignment, or whether to take some more. I love the reflections in the one above.

What do you think? Which do you prefer? Not Leeds’ prettiest buildings by a long shot, but interesting trying to get a good angle on some of the more brutalist architecture! 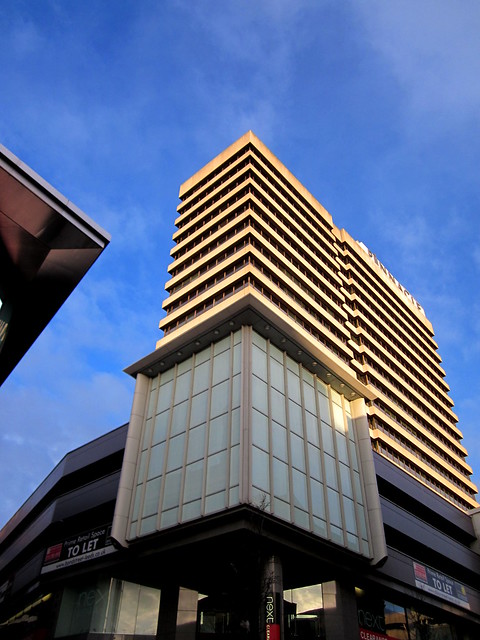 It was three years ago that I started a new job in central Leeds. This was my view.

It’s brilliant being that high up over the city. Leeds really has some fantastic architecture (along with some fairly hideous modern stuff. And some fairly brutalist 60s tower blocks).

The best bit about being up that high? You get to see sunsets like this.

I took that one not long after I’d started, and I had it on as my computer desktop background for ages. One of my colleagues saw it one day and remarked “you don’t get sunsets like that in this country!”

I pointed out of the window. I’m not entirely sure they believed me.

A succession of spectacular sunsets followed over the years and occasionally I had my camera with me to capture them.

Just to prove it’s not all about the camera, I took this one with my little £40 Canon point & shoot. It made it into Flickr’s Explore, which I’m still enormously proud of.

There’s something about that skyline which I just love.

It’s not all sunsets though. Sometimes you get some pretty crepuscular rays. This one made Flickr’s explore too. Looks like it’s not just me that likes that skyline.

And recently we’ve moved to a new building. The window behind me points in the opposite direction, over towards the south east.

I’ll just have to make do with sunrise photos.

Prompt: HOME SWEET HOME
Share a tour of your home. Or maybe you have some decorating and DIY plans? What is your favourite room? How do you make a home feel homey?

We’re currently in the midst of doing some reorganising and redecorating at home, so photos of the house are out, at least until we’re all done!

In the meantime though, I’ve been pondering doing a series of daily photos of Leeds and Wakefield, both places I consider ‘home’ these days. Inspired in part by Brent’s iPhone 4S & Japan blog, in which he posts regular photos with his phone out and about. It’s a great blog, and well worth a look.

I’ve taken a ton of photos of Leeds over the years, as you can see over in the Leeds set on Flickr. I’d love to set up a series capturing life & stuff in Leeds, Wakefield and Yorkshire.

Perhaps not daily like Brent, but more regularly than I do at the moment. It’d be an excuse to get the camera out and get some exercise!

I’m wondering about setting up a separate blog, or just incorporating them into the flow here.

What do you think? Worth a go? Would it be something you’d find interesting?

Day four of Blogging Every Day in November and today’s subject is food.

Ah, food. One of my favourite things. Have you ever noticed how restaurants tend to… overcomplicate things?

As my friend Jon pointed out on the menu for his work’s christmas do:

that’ll be prawn cocktail then. Do atlantic prawns come in shoals? What *is* the collective noun for prawns? If memory serves, shrimps come in troups…

Anyhoo. Getting back to the subject at hand.

We were out last night at Salvo’s with some friends where we had a jolly nice meal. We shared a basket of Pane e Olio (assorted bread in a basket with some olive oil and roasted garlic butter), then I went for a chef’s special pizza carne, which came with ham, chorizo, salami and duck.

Duck, on a pizza? Odd, but very nice. There was a *lot* of meat on there though. The duck may have been a carne too much, in retrospect!

My dinner companions were somewhat surprised to discover that in all the many years[1] I’ve lived in Leeds, I’ve never been to Salvo’s. It’s a bit of a Headingley institution. Even K, who’s from waaay darn sarf has been there and, many years ago, used to work there!

So, I’ve finally eaten at Salvo’s. I wonder what other Leeds institutions I’ve been missing for all this time?

Where’s your favourite restaurant? Do you have one? Tell me all about it. What makes it so good?

[1] Twenty four. Crikey. I’ve lived in Leeds/Yorkshire for longer than I ever lived in my home town of Newcastle. I’ll never be a Yorkshireman though, but will always be a Geordie!

Ah. It would appear that I didn’t read the instructions properly. Day #1 of Blog Every Day In November was supposed to be an introduction, and Day #2’s prompt is ‘something you made’

Ah, well. Something I made could well be yesterday’s roasted pumpkin seeds, which neatly leaves today as an introduction.

Hi. I’m Dave. This is me. I look better in black & white I think, though I generally have a bit more colour about me in rea life. I’m also not really that stern, but my default expression does sometimes come across as slightly cross. I’m not, honestly. This is my happy face:

As my bio page says, I’m a blogger. Well, yes. I’ve had this blog for a few years now, but before that I lived on Livejournal where I racked up something in excess of ten thousand posts. Yes, that’s a lot. It’s a pretty scary number, but it was spread over ten years. I wrote a post about that called life online.

I’d probably describe my blogging style as ‘scattergun’ – I’ll talk about pretty much whatever pops into my head at the time. Some people say you should find your niche and own it, but my niche seems to involve all kinds of random stuff, from why Leeds has great maps and pretty cups of coffee, to musings on Bond films and pencils.

Seriously, if I followed my stats, I’d post about nothing but Bond films and pencils. It’d get boring *really* quickly.

I like taking photos of stuff. I’m a writer, mainly noodling around with short stories (two of which have been published, one in a very swish glossy coffee-table magazine). I’ve ‘won’ NaNoWriMo once, but am still suffering from the after-effects.

I like cyclist, I juggle and am a general all-round geek. Married, father of two. I also like shiny gadgets, funky websites, and good coffee, but have recently started up a tea-related blog, LetterTwenty with Liz from Margot and Barbara. She’s also doing #BEDN, you should go see what she’s up to.

I set up this blog to talk about any and all of the above. You can also find me on twitter and, to be fair, most other places around the internet.

I spotted this out of the window yesterday. Crepuscular[1] rays of sun on the Town Hall in Leeds.

Cross-post to Twitter, bounce it up to Facebook, schedule a couple more tweets across the evening. Watch as the likes and favourites ping up. Retweets happen. People like it.

Then ask myself the question. Why?

I took the photo because I like taking photos. The light was spot on[2] (and indeed was gone thirty seconds later) and I could tell it’d make a nice photo.

Well, I’ve got a lot of friends on there, and I thought they’d like to see it. I like taking sunset photos, and the Town Hall looks ace.

Why Twitter? Someone commented that they’d seen the photo a *lot* on there.

No, of course not. But here I am, sharing it to the world at large.

It also raises the question of why blog? I’m sure we do it to amuse, entertain or even educate, but ultimately isn’t it all about showing off, even just a little? Here’s what *I* think of stuff. Here’s a nice photo *I* took.

I’m not like that in real life, so why am I so garrulous online? There’s an advert on television at the moment which shows a guy in real life versus his online counterpart. His online self is slimmer, fitter, a better dancer. Online, we can be who we want to be, rather than who we are. I’ve written about this before.

Or are we just two sides of the same person?

Thoughts, comments, questions are, as ever, welcomed.

Millennium Square – March2011, a photo by dakegra on Flickr.