Today I’m delighted to be playing host to Gunnar Staalesen, author of We Shall Inherit The Wind and his new book, Where Roses Never Die. More of that later, but without further ado, over to Gunnar.

In May this year I had the honour of being selected Festival Poet for Bergen’s literary festival, a fringe programme of the Bergen International Festival, which takes place every year in May and June. As part of my role I had the opportunity to invite five crime writers to an event. I and the festival organisers therefore decided to plan a series of staged interviews, with me as the chairperson. What a pleasure it was that all five writers accepted our invitation; and on 29 May we met at the Literature House in the centre of the old city of Bergen.
Who were these five esteemed colleagues? And why did I invite them? I will present them in the order they appeared on stage at the Literature House.

Antti Tuomainen from Finland was the youngest of the bunch. He writes dark and compelling novels – The Healer perhaps the most frightening of them all, taking a look, as it does, into the near future, post a climate crisis, and with fugitives streaming into Europe. Does this perhaps sound at least partly familiar? Not only that, it is a good crime mystery, too! Dark as My Heart is another of Antti’s impressively well-told novels, this time in the more classic clime mould, with revenge as its central theme. These two novels are both translated into Norwegian. But I am also looking forward to reading the next one, The Mine, which it seems I have to read in English before it is translated into my own language. Finnish is impossible to read, even for someone from a neighbouring country.

Swedish we Norwegians can read, however, and number two on the writer list was Håkan Nesser, my personal favourite among the generation of Swedish writers who have followed Sjöwall & Wahlöö. Nesser is both a very good literary and crime author who never writes the same story twice. That may be the reason why he has already completed two series: the first one totalling ten books, all concerning police inspector Van Veeteren and located in the fictional city of Maardam, somewhere in Europe. The second series consists of five books, all about Gunnar Barbarotti, a police inspector in another imaginary city – Kymlinge in Sweden. Both series are extremely well written, expertly plotted and are a pure pleasure to read. Nesser has also written several standalone novels, one of which bears the intriguing title, Kim Novak Never Swam in Geneserat’s Sea.

Of all the Norwegian crime writers from more or less my own generation, Karin Fossum is the one I respect the most. She writes intriguing thrillers, in which she dives into the dark psychological secrets of her characters’ lives, thus painting some fascinating portraits. These character studies are always seen from the perspective of a crime, which allows her to introduce again and again her principal character, police inspector Konrad Sejer, one of the most sympathetic police detectives in modern crime fiction. One of the titles in this series, Calling Out For You (in Norwegian: Elskede Poona; in the US: The Indian Bride), is one of the best crime novels published in Norway in the last fifty years, and in 2009 it was selected as the all-time best Norwegian crime novel by the readers of the newspaper Dagbladet. Karin Fossum has also written poetry and short stories, and she is deeply respected by her Norwegian colleagues.

British readers need no introduction to Ian Rankin. However, it was a pleasure for me to invite him for the first time to Bergen, the old capital of Norway in the middle ages – before our four hundred years under Danish rule, which were followed by almost one hundred years in union with Sweden. There is, therefore, an historical alliance between Scotland and Norway, and this can be sensed in the literature of the two countries. There is even a connection between Bergen and Edinburgh, which goes back to the story of ‘The Maid of Norway’ from the thirteenth century. When I read Ian’s John Rebus books, I also feel a relationship with my own books about the private detective Varg Veum. The way we describe our two cities is very similar; and the way Rebus acts and thinks can be compared to Varg Veum’s idiosyncrasies. Ian Rankin is one of the best crime writers of his generation, and when I met him for the first time in Edinburgh some years ago, he told me he looked upon himself more as a North Sea writer than a UK writer. He was influenced by the same writers as I was when I started writing crime novels – Raymond Chandler, of course, and the guest who followed him onto the Bergen stage.

Maj Sjöwall is the queen of modern crime fiction. With her husband, Per Wahlöö, who sadly died in 1975, she created a watershed in crime fiction. The ten novels they wrote about Martin Beck and his colleagues on the Stockholm police marked the beginning of Nordic Noir, and their writing has had a huge influence on crime writers all over the world for generations since. Without Sjöwall & Wahlöö there would perhaps not be a Henning Mankell, Stieg Larsson, Jo Nesbø, Karin Fossum, Ian Rankin or Gunnar Staalesen.
At eighty she is still a very lively woman, and the interview with her was, for me personally, the highlight of the evening; a conversation I will never forget. We spoke about what she and her husband were thinking when they wrote the very first book in the series, Roseanna, in 1965, their political backgrounds, their view on crime fiction as both entertainment and literature, and the creation of Martin Beck and the other characters in the series.

It was the perfect finale to an evening illuminated by fabulous crime fiction, and by my meetings with five masters of a genre to which I have myself contributed since 1975.

Thanks Gunnar – lots of writers to add to my list to investigate!

Where Roses Never Die is published by Orenda Books and is available in paperback and ebook now. 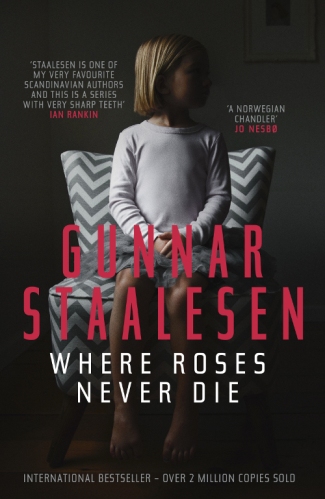 September 1977. Mette Misvær, a three-year-old girl, disappears without trace from the sandpit outside her home. Her tiny, close, middle-class community in the tranquil suburb of Nordas is devastated, but their enquiries and the police produce nothing. Curtains twitch, suspicions are raised, but Mette is never found.
Almost 25 years later, as the expiry date for the statute of limitations draws near, Mette’s mother approaches PI Varg Veum, in a last, desperate attempt to find out what happened to her daughter. As Veum starts to dig, he uncovers an intricate web of secrets, lies and shocking events that have been methodically concealed. When another brutal incident takes place, a pattern begins to emerge … Chilling, shocking and full of extraordinary twists and turns, Where Roses Never Die reaffirms Gunnar Staalesen as one of the world’s foremost crime writers

“He that troubleth his own house shall inherit the wind: and the fool shall be servant to the wise of heart.”
~ Proverbs 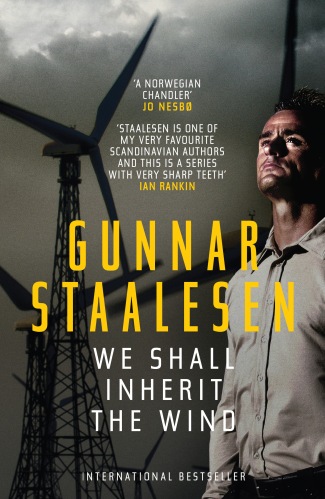 1998. Varg Veum sits by the hospital bedside of his long-term girlfriend Karin, whose life-threatening injuries provide a deeply painful reminder of the mistakes he’s made. Investigating the seemingly innocent disappearance of a wind-farm inspector, Varg Veum is thrust into one of the most challenging cases of his career, riddled with conflicts, environmental terrorism, religious fanaticism, unsolved mysteries and dubious business ethics. Then, in one of the most heart-stopping scenes in crime fiction, the first body appears…
A chilling, timeless story of love, revenge and desire, We Shall Inherit the Wind deftly weaves contemporary issues with a stunning plot that will leave you gripped to the final page. This is Staalesen at his most thrilling, thoughtprovoking best.

I’ve been on a bit of a Nordic Noir kick recently thanks to Karen at Orenda Books, and when I was asked if I’d like to take part in the blog tour for Gunnar Staalesen’s We Shall Inherit the Wind, I jumped at the chance.

This is the first of Staalesen’s books that I’ve read, though it appears he’s somewhat better known in Norway – he’s written over 20 titles which have been published in 24 countries, and he’s sold over four million copies. There have been twelve film adaptations of his Varg Veum crime novels. I’ll have to track them down!

The story starts, as it were, at the end. Varg Veum is at his girlfriend’s bedside. Something terrible has happened and we’re about to find out what. We jump back into a missing person case where Varg has been called in to investigate the whereabouts of Mons Maeland. by his wife. The story unfolds like an origami rose, slowly unveiling more and more layers as we’re drawn deeper into the mystery. Where is Maeland? What’s the link between his disappearance and the proposed wind farm over on the small island of Brennøy?

The mystery is gradually revealed and, as with all great crime stories, each fresh revelation fills in another facet of the picture. Rumours are confirmed, secrets uncovered and a *lot* of coffee is consumed. I thought that *I* drank a lot of coffee, but one thing I’ve noticed about the nordic crime scene is how much coffee they drink!

At heart it’s a story of relationships, and how far people are willing to go to preserve the natural habitat and the consequences of their actions. Families and community are neatly portrayed and dissected by the lone wolf, Varg. Tidbits of information are teased out of people, revealing an unsettling dark side to a lot of the characters.

Staalesen has been called the Norwegian Chandler and Veum is your quintessential private investigator. There’s even a life-sized statue of Varg Veum in the centre of Bergen. 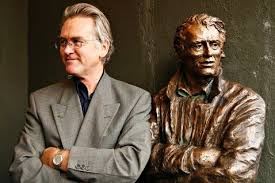 I loved how his character developed through the course of the story. There have been other Varg Veum books but the character is so strong and the story so well crafted that you don’t feel you’re missing out by starting with this book. I’d love to read more and luckily the next instalments in the Varg Veum series – Where Roses Never Die and No One Is So Safe in Danger – will be published by Orenda Books in 2016 and 2017.  Sign me up!

Many thanks must go to Karen at Orenda Books for my review copy.

The blog tour continues tomorrow with Tracy Shephard over at Postcard reviews.