Following on from my wonderings about wands in Harry Potter, I wanted to talk a bit more about Death Eaters.

As I said yesterday, it’s a very silly name. Apparently J.K. Rowling was originally going to call them the ‘Knights of Walpurgis‘ (thanks to Arwen on Twitter for that gem!) – at first glance an equally silly name.

But J.K. doesn’t do things at random – this is the author who even chose the wood Harry’s wand was made from very deliberately:

European tradition has it that the holly tree (the name comes from ‘holy’) repels evil, while yew, which can achieve astonishing longevity…
~Article on Harry Potter’s Wand, from the Harry Potter Wiki

It appears that the Knights of Walpurgis is based on Walpurgis Night or Walpurgisnacht, the 30th of April, the eve of the feast day of Saint Walpurga. In German folklore Walpurgisnacht is believed to be the night of a witches’ gathering.

So, how did we get from the Knights of Walpurgis to the Death Eaters? I’m struggling to find out – if you can shed any light on it, please let me know!

You can just imagine the scene though…

Have you ever wondered about the wands in Harry Potter? I have… 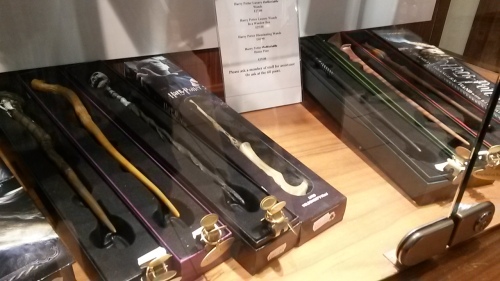 We were in Alnwick Castle recently. They filmed parts of the first Harry Potter movie there, and the gift shop had quite a range of collectable replica wands. Harry, Ron and Hermione’s were all there, as were the wands belonging to Snape, Luna, Tonks and assorted other characters. The kids and I spent a while poring over them discussing which ones we liked best.

It was the wands belonging to the dark wizards which struck me as most interesting.

If, as the book suggests, the wand chooses the wizard, would it not be really easy to tell a bad ‘un by their wand?

Take, for example, the Death Eater wand (it’s the one next to Voldemort’s in the photo). The grinning skull in the handle has got to be a bit of a giveaway, hasn’t it? Imagine before You Know Who turns up again. You’re a Death Eater[1], minding your own business when someone spots your wand.

Or the ‘snatcher’ wand.

[1] What a stupid name that is. Honestly, if anyone can give me a *good* explanation of why they’re called Death Eaters, I’ll give you ONE MILLION HOUSE POINTS.